The sun was just setting when we departed the Oslo Opera House on the afternoon of Sunday 19 December. With our schedule slightly moved back by an unexpected shopping trip to buy pedals, a rather essential item that Mark forgot to pack, we pushed our bikes through crowds of Christmas shoppers and arrived at our start location with just enough daylight left to take the first photo and roll off into dusk.

For the first kilometres the fading daylight gave us an opportunity to do small adjustments to our bikes and packing and enjoy the views onto the Oslofjord from the road that led us up the Ekeberg and out of town. Slightly bigger than my hometown Edinburgh, we chose the Norwegian capital at 60°N, on the same latitude as Shetland, as the start for our 4-day cycling adventure, which would lead us south to the German capital Berlin at 52.5°N, to arrive on the evening of the 21 December, the shortest day of the year.

The views when we reached the top of the first climb, with the last light painting the skies above the Oslofjord in a subtle orange, were amazing. Nearby Edvard Munch, a Norwegian national icon, painted one of the world’s most famous paintings, The Scream.

The only time we saw the sun again was for a brief minute a few hours before we arrived in Berlin. In the 76 hours that lay ahead of us before reaching the Brandenburg Gate we cycled a total of 605 km and enjoyed an overnight ferry ride from Sweden to Germany. And while we hadn’t planned to do part of the journey by taxi and train, the conditions were not quite the winter wonderland we had dreamt of – a combination of road and weather conditions made the entire adventure pretty ‘spicy’. Faced with such adversity we had two choices: to give up, or get creative and adapt the plan. We chose the latter.

Riding into that first night, the temperatures dipped to about minus 6 when we left Oslo. As we continued south, freezing fog patches tested our resilience from time to time. As hard as it was, little did we know that this cycling to the Swedish border was some of the best we encountered on the trip. The majority of roads were well cleared and, when needed, our tyres coped well with the snow. Mark was riding a road bike with Shimano’s Dura Ace Di2 12 speed and Schwalbe Pro One tyres, while I was on my trusted Kinesis Tripster AT gravel bike with Schwalbe G-One Overland tyres.

Only a few hours in we realised that our anticipated average speed of 20km/h was massively optimistic as we made steady progress and settled into a routine. Our flow was interrupted when it started raining around 11pm. Within a few minutes, all roads turned into ice rinks. With about 20 kilometres to the next hotel, we were lucky to find a taxi to pick us up before roads became impassable even for cars, blocked by jack-knifed lorries.

I normally don’t plan trips with spreadsheets in advance, but as we needed a good idea of how much darkness we would encounter to bring sufficient Exposure lights for the whole ride period and plan around ferries, we had our trip laid out by date, time of estimated arrival, time of estimated departure, sunrise/sunset, location, km, ferry km, distance, daily distance, daily climbing, hours riding time, daylight hours, hours with lights, overall hours riding per day, hours riding with lights per day and charging time. 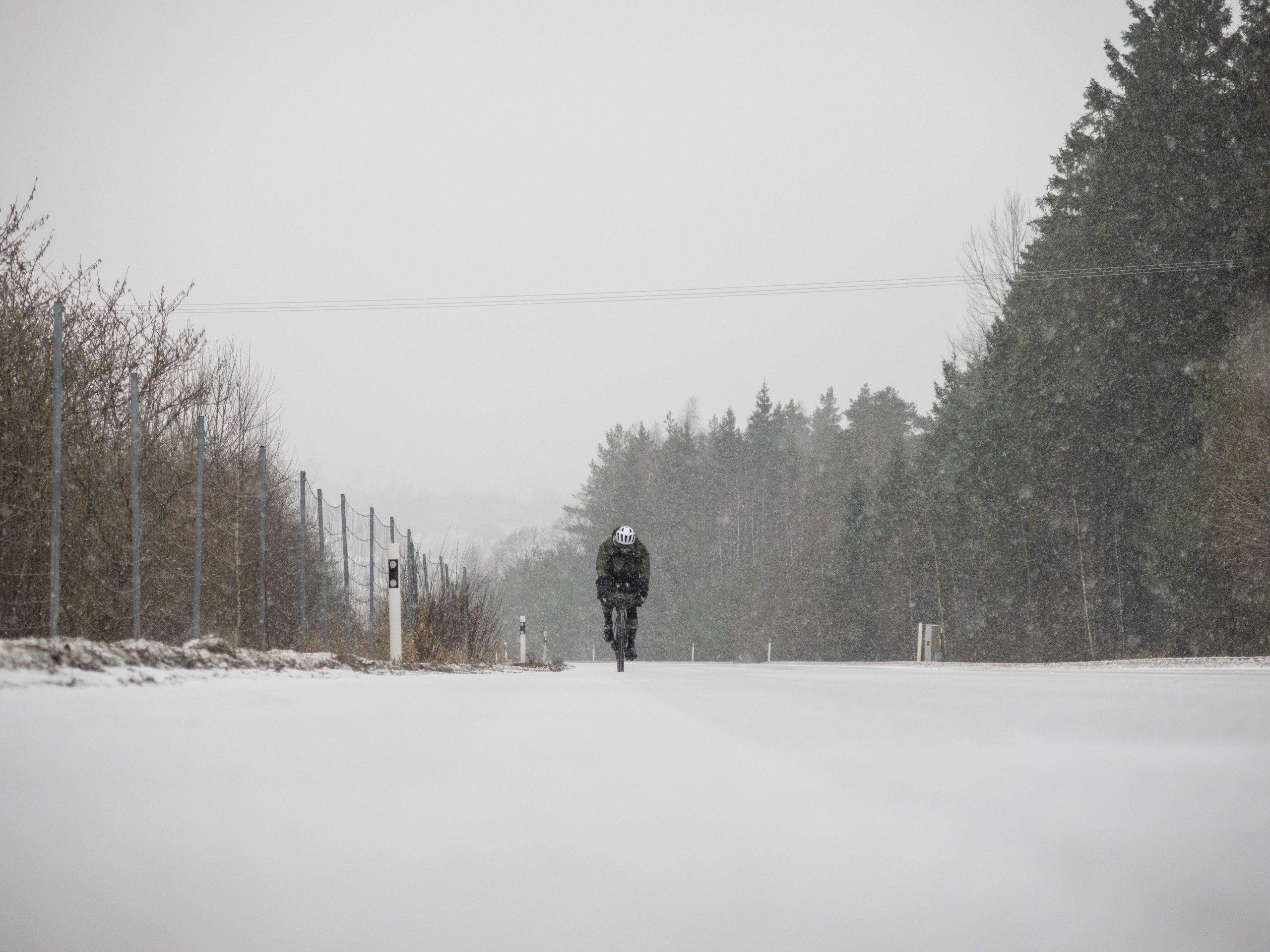 This all became redundant on the next morning, when we had to completely change our plan over breakfast. While the conditions had improved slightly, the roads were still icy at times and more rain was forecast. It was impossible to stick to our original route and ride 630 km over the next 48 hours to the ferry in Gedser in Denmark. While this ride was always meant to be a challenge, we neither wanted to cut fun or common sense out of the journey. The closest ferry connection to Germany was from Gothenburg to Kiel. The terminal was about 210 km south, but it required us to be there at 5.30pm to check in. Leaving at 7am when the gritters had finally passed, we set ourselves a cut off time of 3pm, at which we would find the closest train station and take the next train to Gothenburg to make the ferry. The riding to the train station was interspersed by short but intense snow storms, followed by more freezing rain. By the time we stopped in Ljungskile, which neither of us could pronounce properly, our bags on the bike were covered with a solid layer of ice. 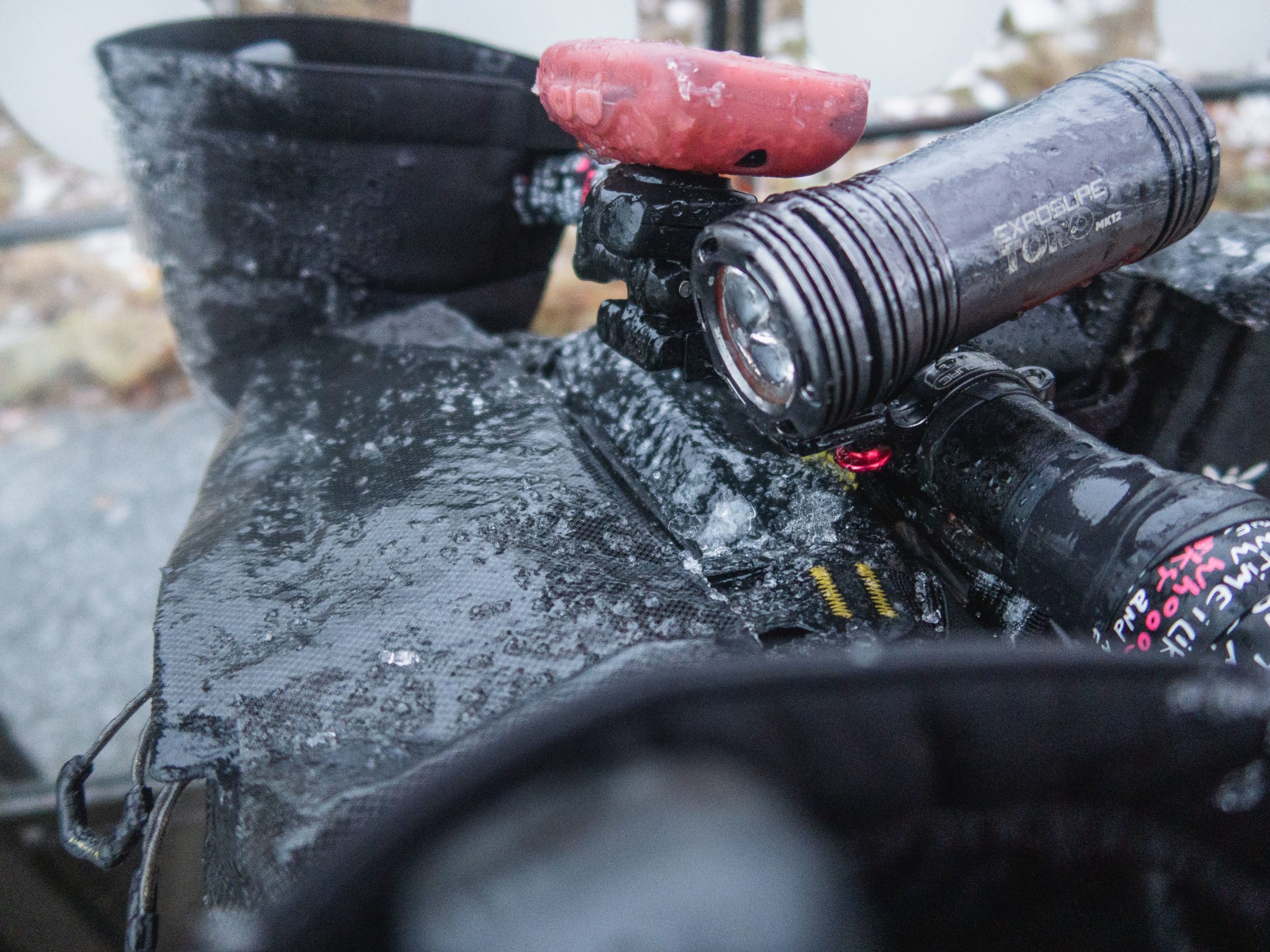 The 14.5 hour ferry ride gave us time to rest and eat. Arriving at 10am the next day, we were greeted with much warmer temperatures in the German port city of Kiel. The mercury had risen by about 15 degrees Celsius since our departure in Oslo, and the last 350 km to Berlin required sufficiently less layers on our bodies to keep warm. With pogies still fitted to the drop bars, I needed none of the four pairs of gloves I had packed for the rest of the journey. In the preparation for the trip we had not only used a spreadsheet to set out the trip, we had also used the short stint of cold temperatures in Scotland to test possible layering combinations to suit the outside temperatures best. For now all we needed were bibs, base layers and our Endura waterproofs, which did a great job keeping us dry. 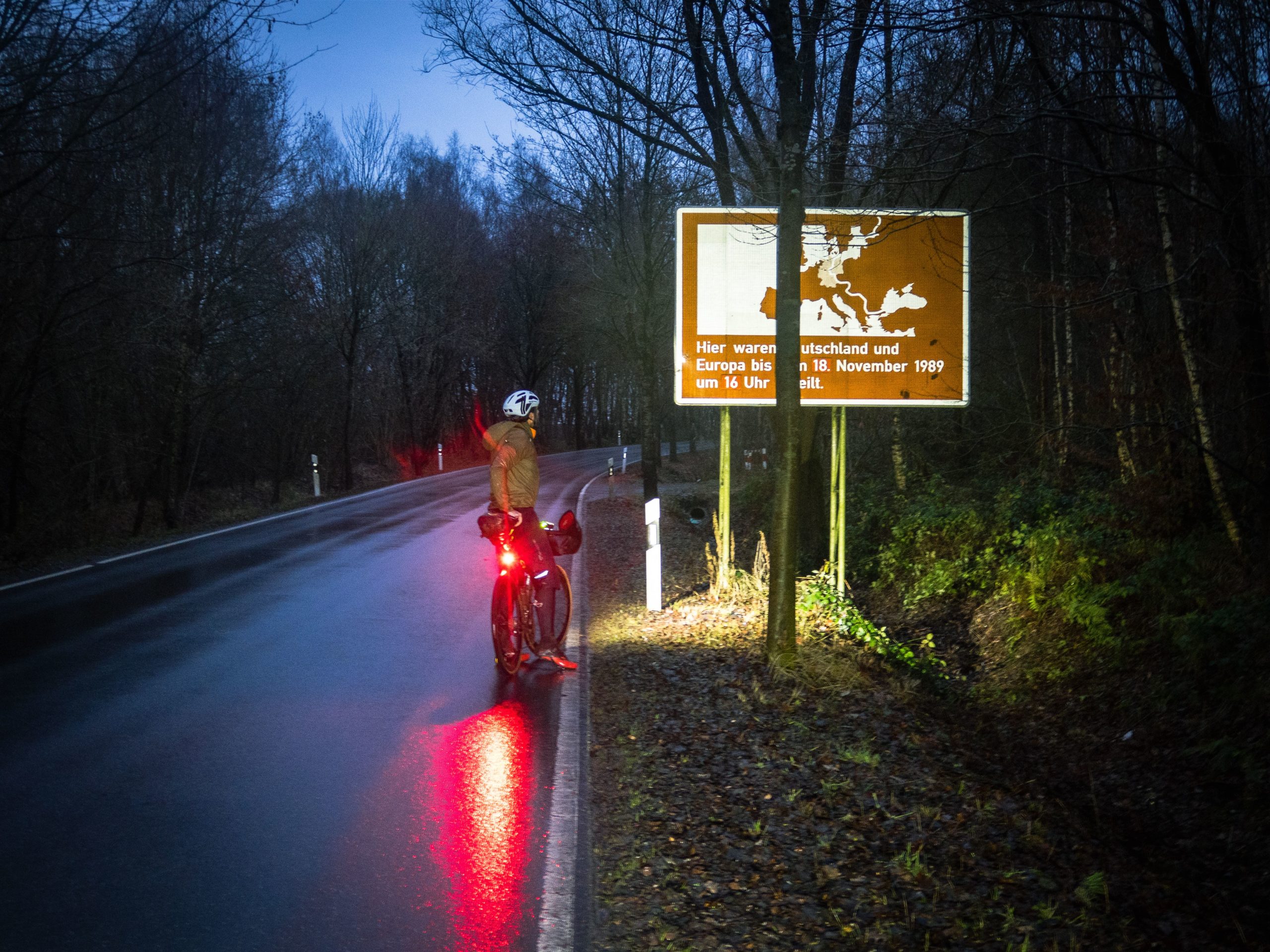 Passing from Schleswig-Holstein, which turned out to be surprisingly hilly, to Mecklenburg-Vorpommern, we crossed the former Iron Curtain, marked by a big sign where Europe was once divided into West and East. It was a moment that had a profound impact on Mark, and made us chat about my childhood in the East of Germany for a while. While trying to find something to eat in Ludwigslust at around 9pm, we wondered where all the people were. Unlike British towns, which are normally bustling with people on the nights leading up to Christmas, we had the streets all to ourselves. To our surprise all hotels in town were booked out, but our last-minute find on booking.com turned out to be an apartment with three bedrooms and a massive lounge area. It offered sufficient space to settle with a pizza and a bottle of beer, dry all wet gear and start our last day of riding, the shortest day of the year, rested and dry. 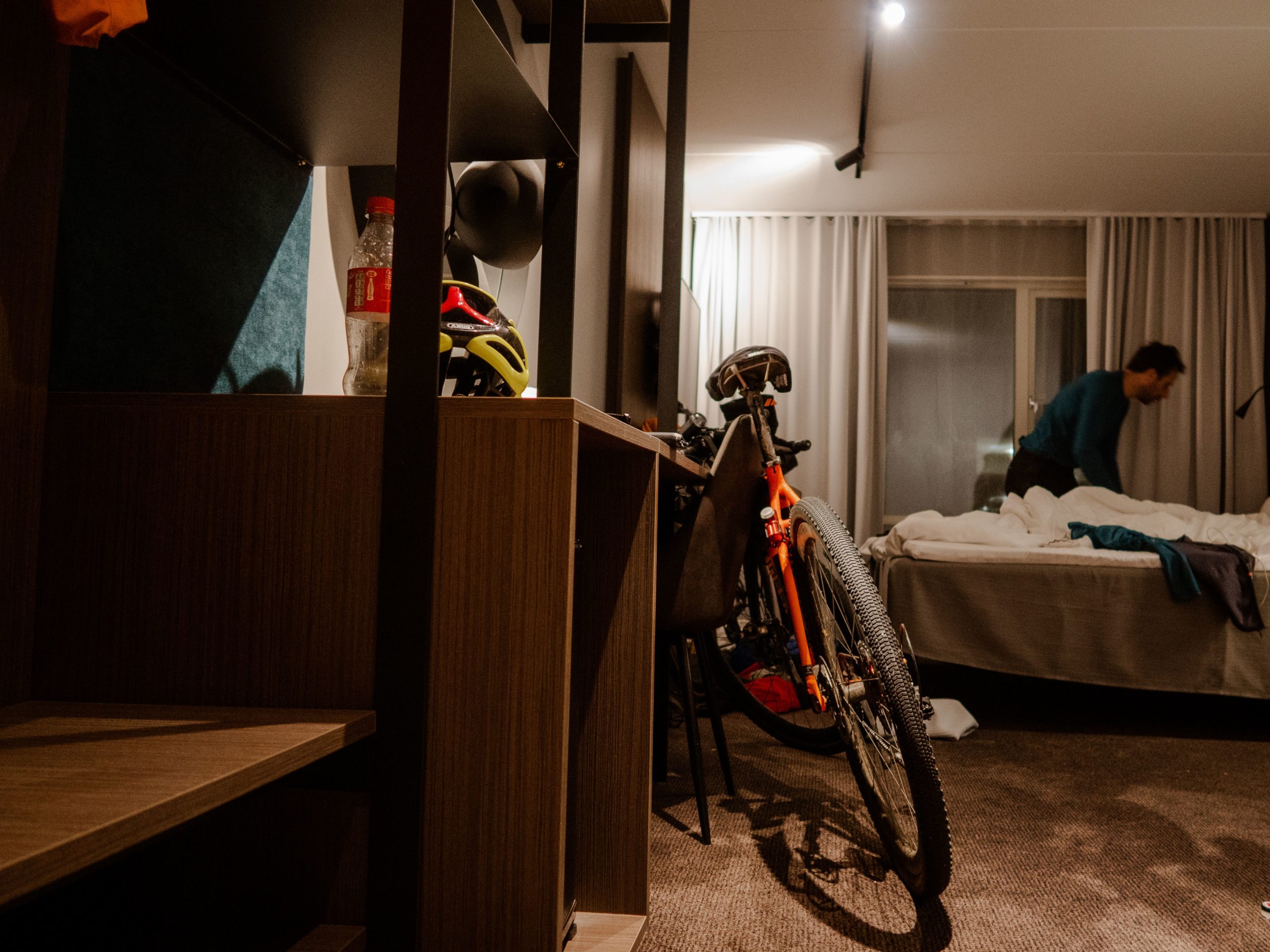 A beautiful, but challenging cobbled road followed by a bumpy gravel track made us re plan our route for the last day on Komoot. While we had high hopes to see the sun while rolling out into the darkness on the shortest day of the year, day four of our trip felt like an eternal dawn. Thick fog made us choose the slower but more safe option of riding on cycling paths instead of roads. 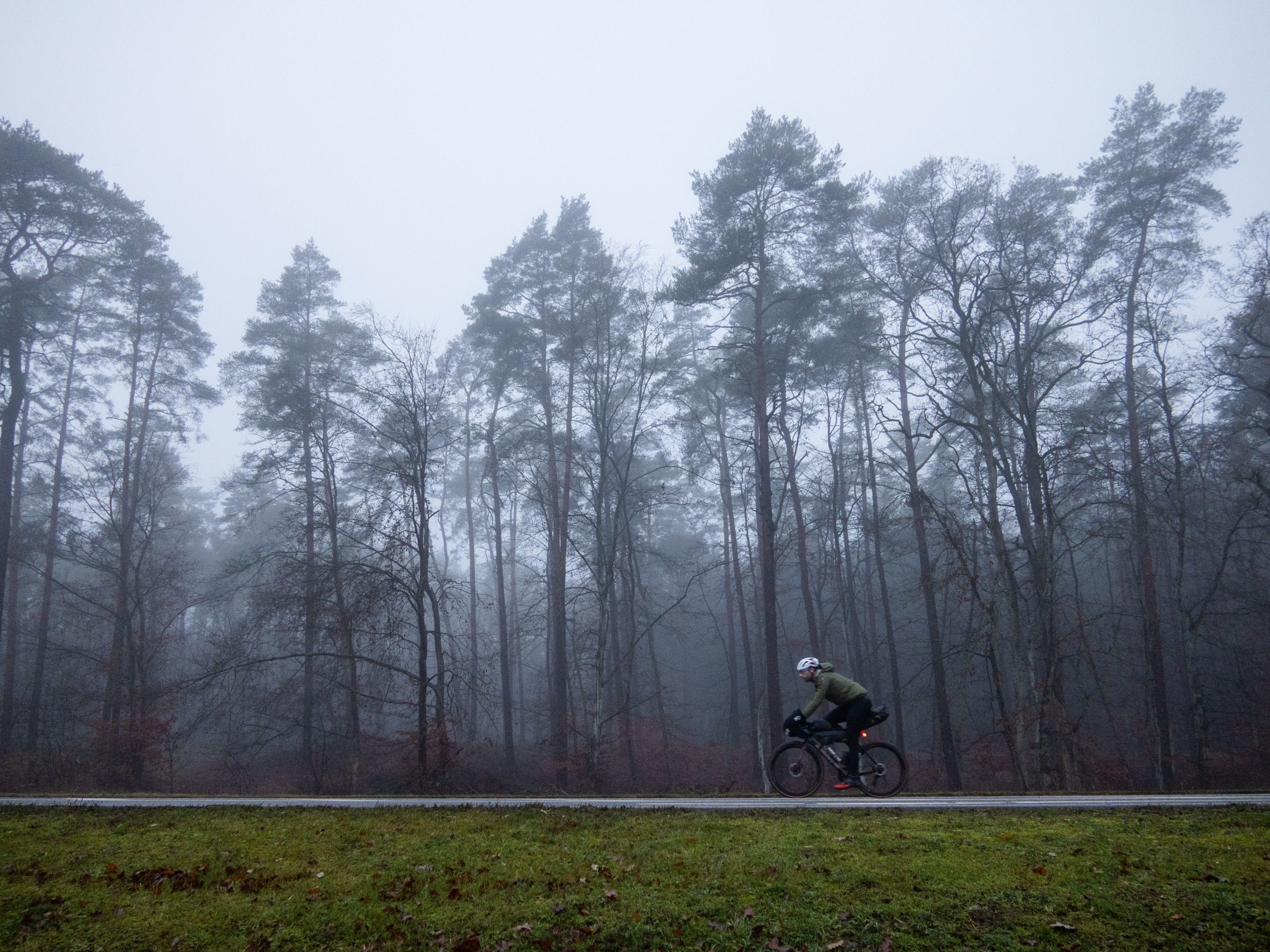 Just before we reached the greater Berlin area, the clouds moved for a short while and gave us a quick glimpse of the setting sun. Similar to day one, we took the time to enjoy the moment and capture it with pictures before setting off on the last kilometres into the German capital. We had cycled from the calm seas of the Oslofjord to the extensive forests of Brandenburg, which looked beautiful in the low winter light. Raphael, a friend of mine and organiser of the Orbit360 gravel series, had invited us to stay at his home and already organised a box for Mark’s bike, so there was no pressure for us to arrive at a certain time.

Without any time burden we rolled towards the Brandenburg Gate along the Straße des 17. Juni, which like no other road in the capital, is full of history. Renamed to honour the victims of an uprising by East Germans after Stalin’s death, the former Charlottenburger Allee has been used for mega-events like the Loveparade or New Year’s party, and also serves as the starting point for the Berlin Marathon, which both of us had run. Now it acted as our finishing straight.

There were no fireworks to end our ride, just the calm and happy realisation that we had a great adventure. And while it was a shorter ride than planned with loads of difficult conditions along the way, it once again proved to me that winter is a great time to ride bikes. And even more so if the journey is shared with a good friend.

The route of the ride, supported by Komoot, Schwalbe and Shimano, can be found here. Markus carried on cycling from Berlin to Erfurt where his family lives, cycling a total distance of 904 km from 19 – 23 December. 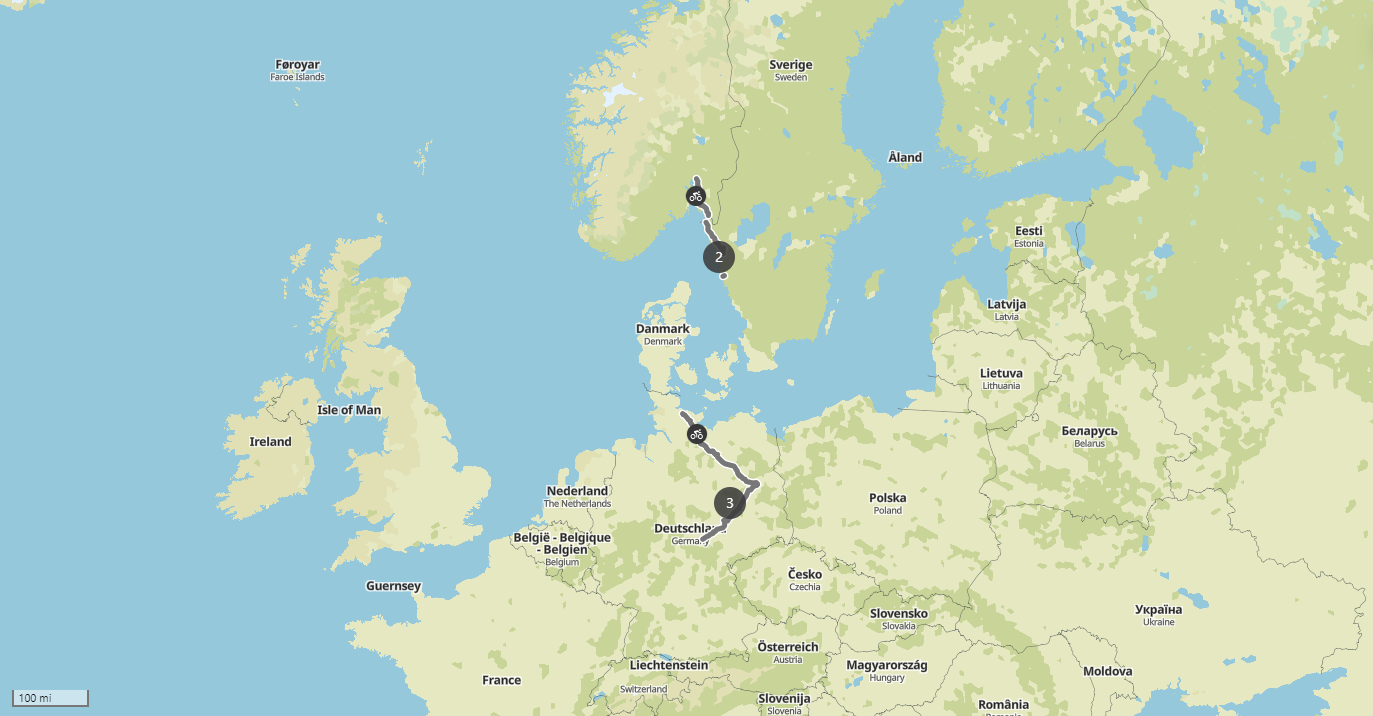 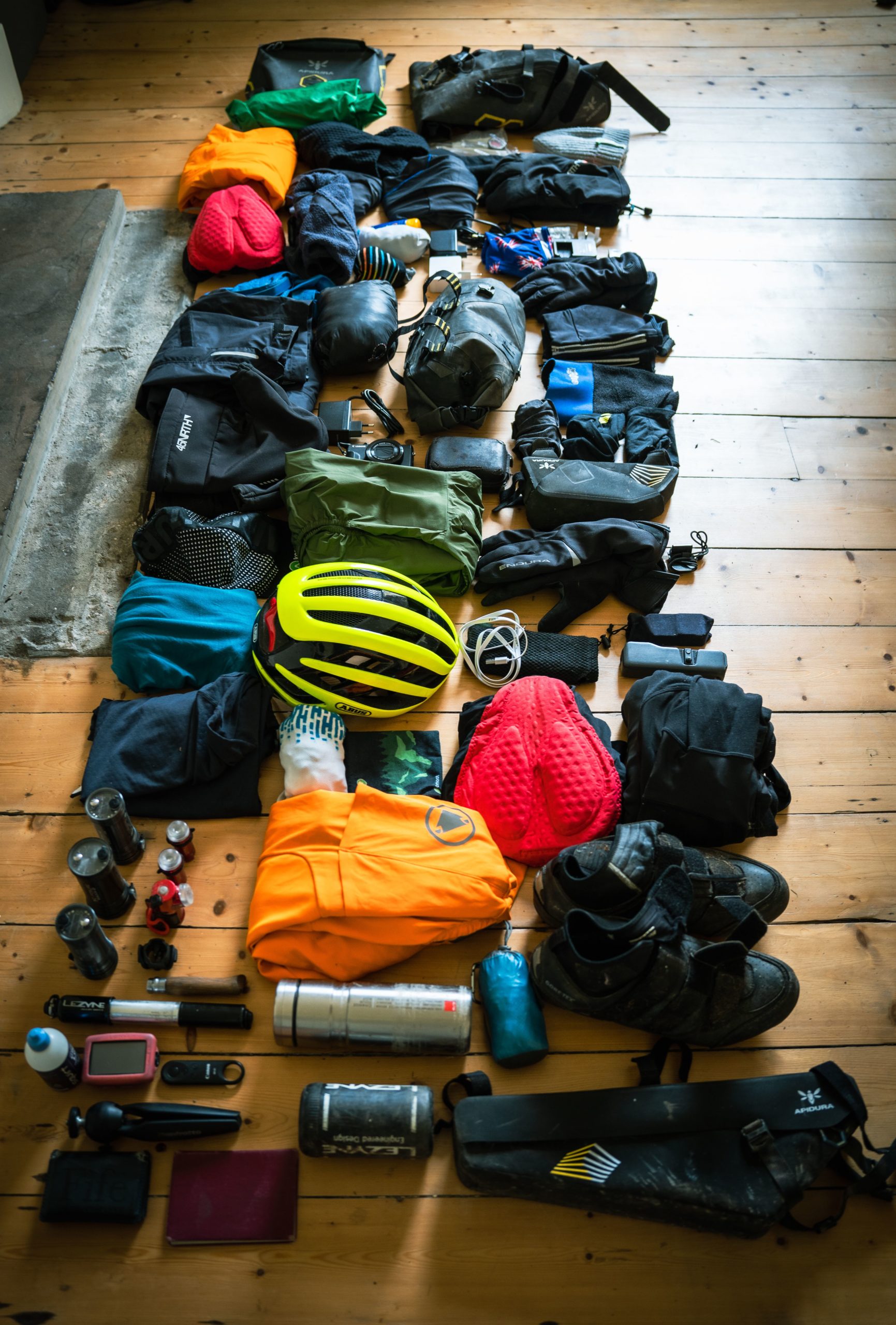 If you’re inspired by Markus’ trip, or a bike packing trip abroad sounds appealing to you, it’s crucial that you have adequate insurance in place. Yellow Jersey’s comprehensive cycle travel insurance will cover emergency medical expenses, trip cancellation, trip curtailment and trip abandonment whilst riding abroad.  If you want to cover your bicycle against damage whilst in the hands of the airline or whilst riding, Yellow Jersey offer a range of comprehensive policies to cater for your needs. If you need some assistance, just give our friendly support staff a call on 0333 003 0046.

Five different places you must ride your bike