Digital side view mirror tech is one of those technologies that U.S. market cars haven’t been allowed to enjoy just yet. A number of manufacturers offer vehicles in Europe or Asia with the aero-improving tech, but current American vehicle regulations mean cars here need to be sold with old fashioned mirrors. And let me tell you folks — after trying out digital side view mirrors on a Euro-market car, I’d be completely fine if they never make it here.

Just so we’re all on the same page, digital side mirrors replace the physical mirrors on either side with cameras. The cameras are affixed to thin stalks protruding from the same area as a typical mirror, and said live camera feed is piped into screens on either side of the car in the same general space you’d divert your eyes to in order to look at a mirror.

A couple undeniable benefits come into play here. For one, the car becomes more aerodynamically efficient. Traditional mirrors are a big drag (literally) on a car’s coefficient of drag figure. Look at the Audi Q8 E-Tron as an example. The U.S. spec version with traditional mirrors faces a 0.02 increase in its coefficient of drag versus the Euro-spec Q8 E-Tron with its digital side mirrors. For an EV — where total range is a major buying metric — that’s a huge number, and it’s going to make a noticeable difference. Secondly, mirrors are notorious for causing wind noise in the cabin. Manufacturers try their best to engineer around it, but there’s no denying that a big thing sticking out the side of the car is going to produce noise at 70 mph. When you drastically reduce the size of that protrusion, as a small camera in place of a mirror does, the noise it produces naturally goes down, too. That’s great!

Those are the pluses. The unfortunate downside is that side view mirrors just aren’t that nice or natural to use in practice. I got to spend about eight hours in the saddle of a 2024 Audi Q8 E-Tron with its side view mirrors recently, and even after that amount of time, I never grew to like the tech. Of the problems, the most notable is the perspective switching your eyes and brain are forced to go through every time you look at the in-cabin screens. When shifting your eyes from the road to a traditional mirror, your focus and view of the world naturally stays the same. Spatially, our brains sort out — or at least years of driving has trained them to — distances, closing speeds and more when we see a vehicle in a mirror. Go ahead and throw all that out with camera side mirrors, because trying to decipher how far away a car is and their closing speed on a screen is a whole different ball game. It requires a level of focus that is far greater than a quick shift of the eyes. Instead, I found myself taking longer looks into the screens and second guessing where a car was in relation to me. That’s more time with my eyes away from the road in front of me, which is always a bad thing. A constant shift in focus from something that seems very far away to something that is just a couple feet away from you can throw anyone for a loop. Folks who find digital rearview mirrors — seen in plenty of vehicles sold stateside now — troublesome will find their annoyances magnified with side camera mirrors.

Another unexpected downside is the inability to adjust your point of view. Before driving a car with camera side mirrors, I had no idea how much I’d tilt, slide or shift my head in order to get a slightly different view out of my side mirrors. Situations with constantly changing traffic or congested merges call for last-second checks or peeks that a subtle lean forward or to the side can accomplish in a regular mirror. Seriously, pay attention to these small but almost imperceptible movements you make next time you drive. With a camera mirror, what you see is what you get 100% of the time. If you want to see any more than what the camera is permanently pointed at, a full turn of the head is necessary. It was a nagging annoyance that I could never quite shake. Plus, for you nerds that want to get a glimpse at the rear of whatever neat car just passed you going the other way, forget about it. A vehicle at even slow speeds in the opposite direction will turn into a speck on the screen before your eyes even get a chance to register it. 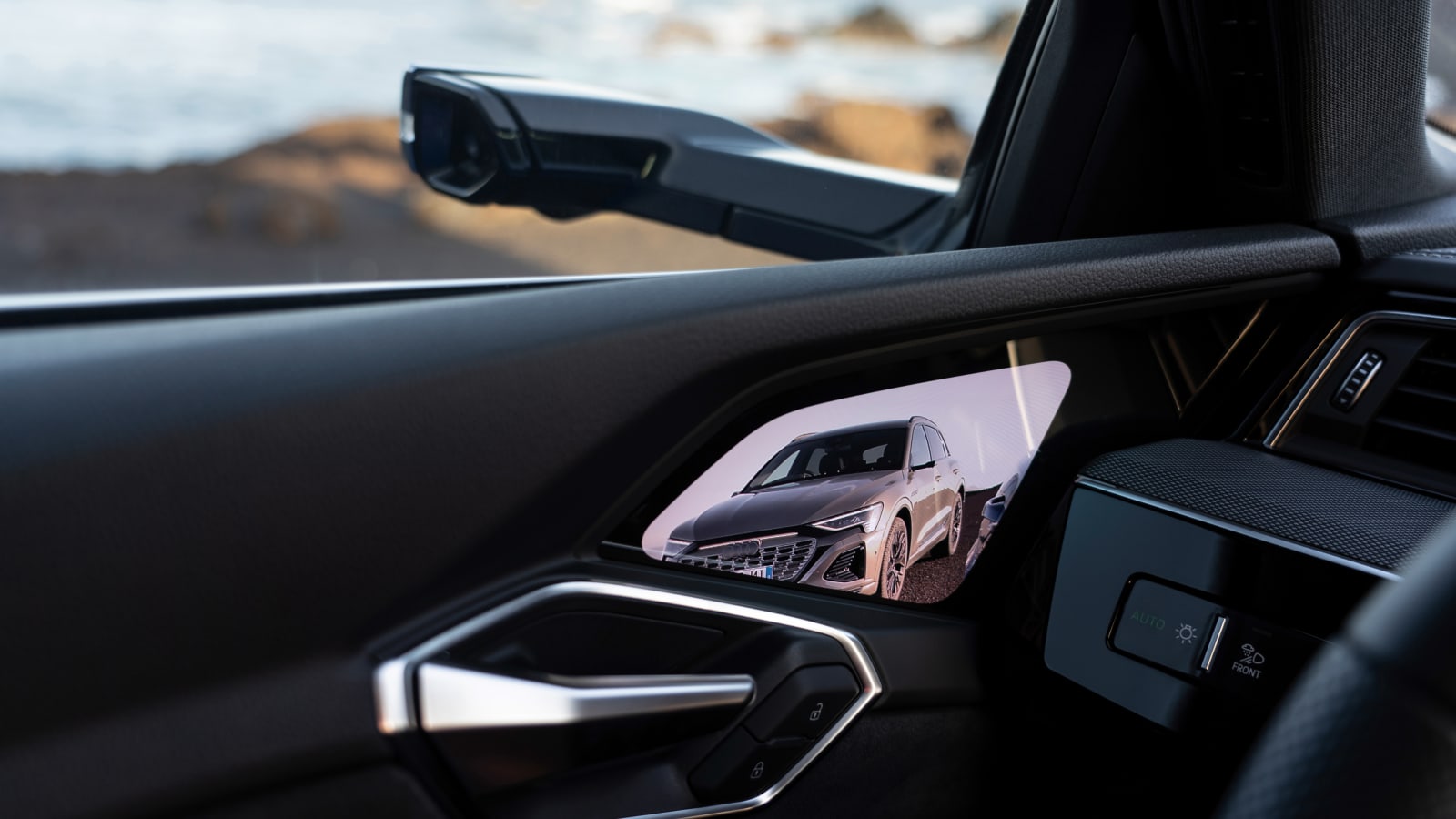 I’m sure you’re all waiting for me to complain about inclement weather or nighttime performance, too, but I’m sad to report that in all the time I had with these mirrors, not a single minute was spent in dark or snowy/rainy conditions. Manufacturers engineer in protection from poor weather, but they do the same for digital rearview cameras, and most solutions don’t work anywhere near as well as I’d hoped they would. For the time being, though, I can’t definitively say one way or another from experience if side view camera mirrors are an acceptable alternative in these scenarios.

One particular bit I did like that is specific to the Q8 E-Tron I drove was the blind spot warning implementation. In this way, it was superior to traditional blind spot warning. Instead of just a light that blinks on and off in the mirror as we’re accustomed to, the screen in the car would transition from a yellow-to-red outline as a car moves into and then out of your blind spot. That outline of the screen is easy to see in your peripheral vision and provides easily digestible information with very little effort on my part.

Despite the upsides, I largely found side view mirrors to be less useful for understanding what vehicles were behind or alongside me than traditional mirrors. That sucks, because I’m typically all for new tech that could theoretically make us safer. In this case, though, I’ll happily trade a little aerodynamic drag and wind noise for a more sure view of traffic.