It’s really, genuinely, actually here: a new Mazda with a rotary engine. The new MX-30 R-EV plug-in hybrid has been revealed. It looks a lot like the regular one, but it swaps a fair bit of battery for a sizable gas tank. It also picks up more horsepower and a special edition model.

Early on when Mazda announced the rotary range-extended MX-30 was on the way, we imagined it would be like the BMW i3; mostly an electric car with a gas engine that was more of a back-up generator. As it turns out, it’s a little bit closer to a Chevy Volt. The battery capacity is half that of the full-electric model at 17.8 kWh. Mazda estimates 85 kilometers of range on the WLTP cycle, and we would expect about 50 miles, half what the electric version can do. That’s not especially impressive, but it does seem that the gas engine will be able to let you go much further than the i3 could. Mazda didn’t give a range estimate, but the gas tank is a sizable 13.2 gallons, compared to the i3’s roughly 2 gallons. Fuel economy also wasn’t given.

Still, MX-30 R-EV’s whole system runs as a series hybrid, with the gas engine simply generating electricity as needed (when the battery is low and/or acceleration demand requires extra electricity from the gas engine), rather than directly driving the wheels. The electric motor in the R-EV is more powerful than the regular MX-30 with 168 horsepower and 192 pound-feet of torque. It’s still not a rocket, though, with a 0-62 mph estimate of 9.1 seconds. The fact the R-EV weighs 293 pounds more than its all-electric twin probably contributes to that number.

Hanging off the side of the electric motor, and attached to a generator, is the first production rotary engine Mazda has built since 2012. It’s called the 8C, and it has just a single rotor with a displacement of 830 cc. It has side intake and exhaust ports like the RX-8’s Renesis engine, but it has direct fuel injection and an aluminum rotor housing. It makes 75 horsepower on its own, roughly twice what the i3’s two-cylinder engine would make. Of course, this is just for generating electricity, rather than powering the wheels. 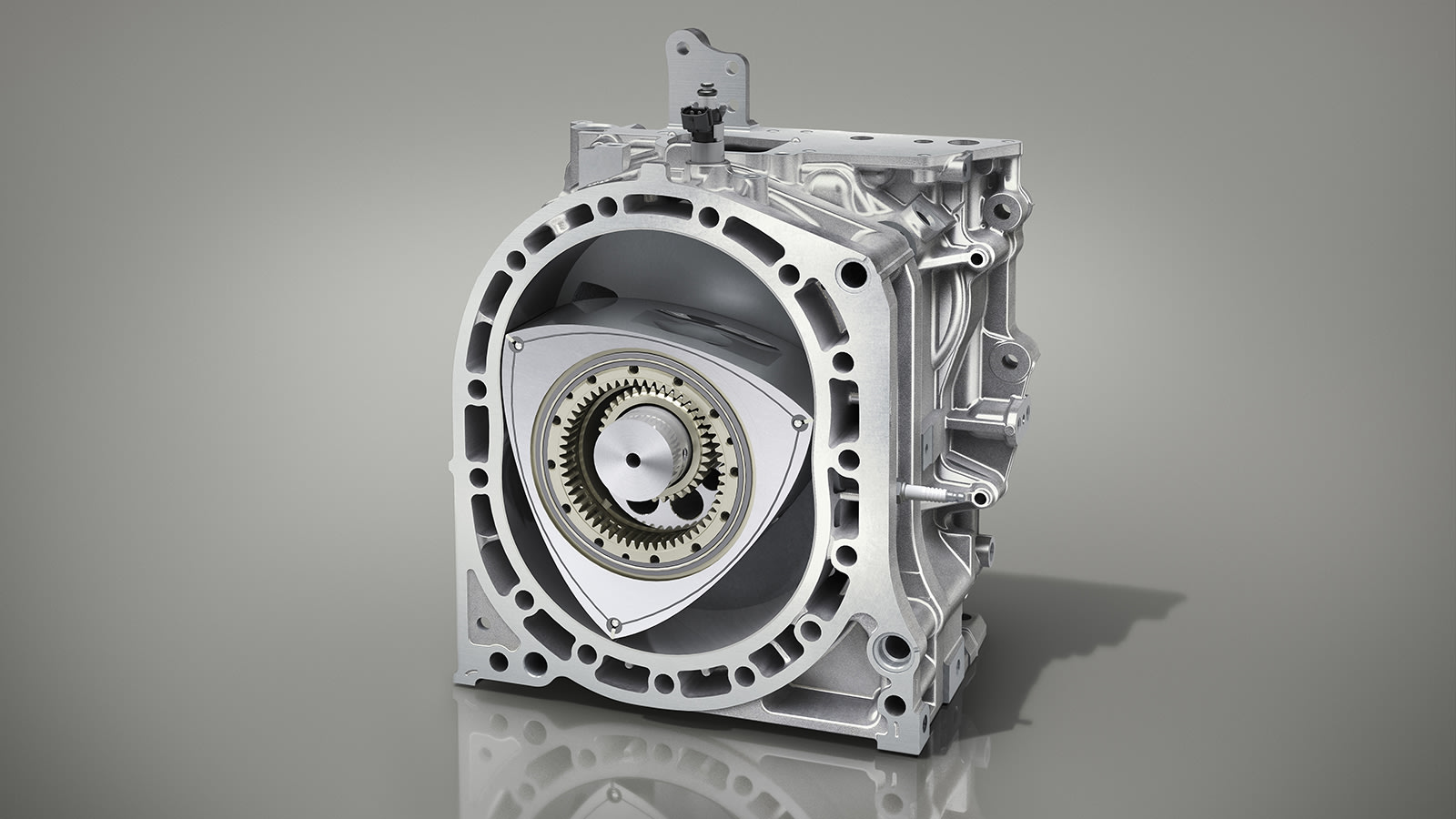 Like many current plug-in hybrids, the MX-30 R-EV has selectable modes for operating the powertrain. Normal generally operates as an EV, but when acceleration demands are high enough, it will kick on the gas engine to maintain charge. It will also run the gas engine when the battery is depleted for acceleration needs. The EV mode runs it in full EV, unless the driver presses the gas pedal far enough, like with an automatic transmission kick-down. And there’s a Charge mode that lets the driver set a battery level for the car to target. It will maintain that state of charge when reached after the battery has drained, or it will recharge the battery as it can up to that level with the gas engine. And on the subject of charging, the MX-30 R-EV supports DC fast charging, but just to a rate of 36 kW. Mazda estimates it can go from 20% to 80% charge in 25 minutes with DC charging. Also, there’s a 1,500-watt auxiliary power port in the car for powering appliances.

The rest of the car is pretty much the same as before. It has a MacPherson strut front suspension and a torsion beam at the back. It has the same G-Vectoring control as the electric model. The interior is the same as is the unique door design. 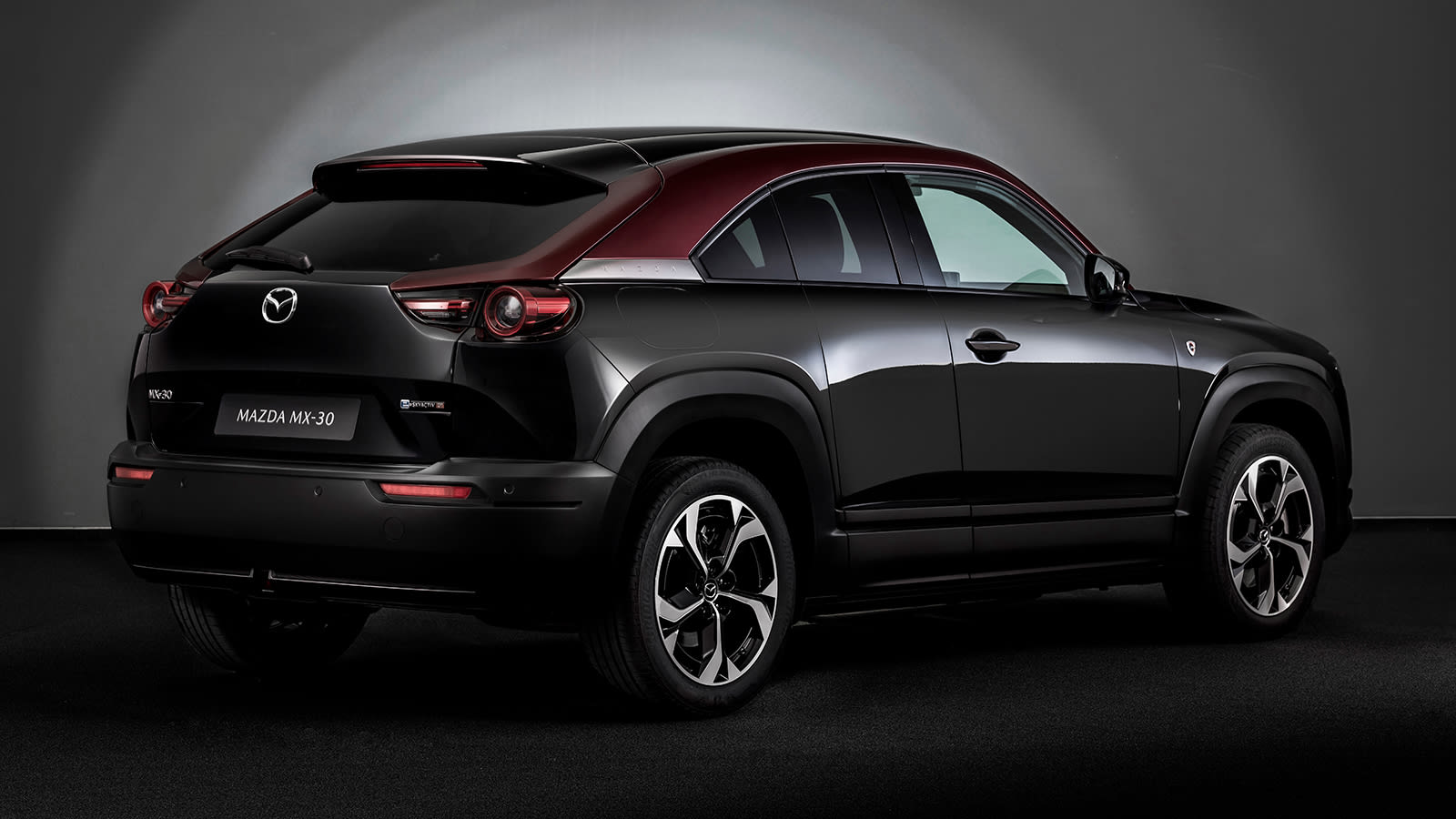 There are a couple of small exterior changes to the R-EV, though. All versions of it get the new rotor-shaped badges on the front fenders, as well as an “E-Skyactiv R” badge at the back. It has unique wheels, too. And, as shown at top, there’s an Edition R model that gets a unique red roof, black body and rotor logos in the head rests and floor mats.

Exact availability hasn’t been given, but the MX-30 R-EV does go on sale this year in Europe. Mazda has also previously said that it will go on sale in the U.S. in the 2023 model year.