The Nissan Z GT4 race car was first shown in September, but today made its formal debut at the 2022 SEMA show. Nissan revealed that it has a roughly $230k price tag, and we learned the Z GT4 has 450 horsepower and 443 pound-feet of torque.Pilot customer teams will compete in next year’s SRO Pirelli GT4 America series, but Nissan says orders won’t open until mid-2023.

If you’re like us and aren’t entirely satisfied with the performance of the new Nissan Z, a factory-backed GT4 race car version is coming to a paddock near you. Nissan first revealed the upcoming Z GT4 back in September, but today the NISMO-tuned machine made its public debut at the 2022 SEMA show, and we also learned details about its specs and pricing.

Developed by Nissan’s NISMO motorsports division, the GT4 car features the same basic twin-turbo 3.0-liter V-6 as the regular Z. However, it has been modified to make 450 horsepower and 443 pound-feet of torque—notable increases of 50 horses and 93 pound-feet. The GT4-spec Z also has a chassis that’s specifically tuned for competition. Along with a big rear wing and other aerodynamic addenda, it has Brembo brakes and sticky race-compound tires mounted on 18-inch Rays rims (10.5 inches wide up front, 11 inches wide out back). 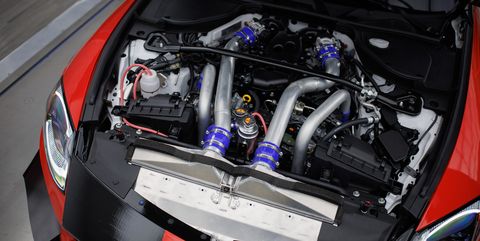 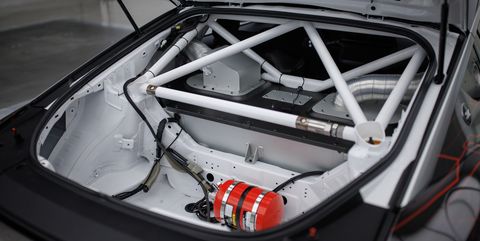 Back in June of this year, a Z GT4 concept participated in the 24 Hours of Fuji as a test entry. Next year, Nissan says it will provide cars to pilot customer teams for the 2023 season, which in the U.S. will include the SRO Pirelli GT4 America series. The company is doing the same in Japan with Super Taikyu racing.

The Nissan Z GT4 at the SEMA show has a red and black livery that mixes modern style and retro cues. In addition to the regular Z car’s updated logo on the rear quarter panel, the number 23 in the “rising sun” circle on the hood is said to be a callback to Nissan’s racing liveries in the ’70s. 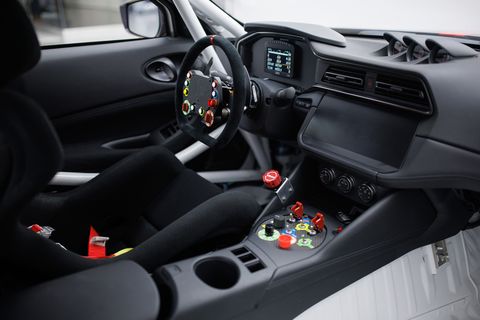 Inside, the Z GT4 has been stripped of its carpeting as well as its standard digital gauge cluster and center touchscreen. A roll cage has also been installed along with a racing seat for the driver, who grips a microsuede flat-bottomed steering wheel outfitted with switchgear and paddle shifters. Other control toggles and adjustable settings for the ABS are located on the center console where the gear lever traditionally is.

Nissan says the Z GT4 will cost $229,000, but that doesn’t include the mandatory destination charge, which we expect to be at least $1000. Of course, racing is an expensive endeavor (even for amateurs), so the price of owning and actually tracking the Nissan Z GT4 will require deep pockets when orders open in mid-2023.

For those who can afford it, the GT4 version should be a lot more satisfying than the standard-issue Z, at least at the track.