• Dressed in Lancia Blue, this 1968 Fulvia coupe is a rare and handsome little car with surprisingly advanced engineering.

• An interesting and more affordable alternative to an Alfa Romeo GTV of the same vintage, the Fulvia is so rare that you’re almost ensured that you’ll never see another one outside a Lancia club meeting. It’s up for auction on Bring a Trailer, with bidding ending on Tuesday, May 24.

It’s more than a little strange when explicit photos of your ex appear on the internet. But that’s exactly what happened this week when 150 photos of my ex–Lancia Fulvia popped up on Bring a Trailer—which, like Car and Driver, is part of Hearst Autos. It was my first classic. I bought the Lancia Blue on tan vinyl 1968 Series 1 Fulvia after spotting it on Bring a Trailer at the end of 2008. Back then, Bring a Trailer listed interesting and oddball cars; the addictive auction site it has now become was still a few years away.

Purchased on the sage advice of contributor Jamie Kitman, who assured me that his Fulvia would likely be the last car he’d sell out of his 30-plus-car collection, I drove out to Connecticut from Michigan in C/D’s long-term Jaguar XF to see and drive the Fulvia. I enlisted the help of Lancia mechanic Frank Spadaro of Dominick European Car Repair in White Plains, New York, to give me another set of eyes and an expert’s opinion. Although we spotted some rusty floorboards, the car came with a replacement set. Spadaro noted a few other minor issues, including a carburetor feeding a bit too much fuel.

The seller had imported the car from Italy, painted it, retrimmed the interior, and swapped in a newer engine. While it’s never a good idea to look at a car in the rain—everything seems nicer and cozier when it’s wet out, and it’s tough to properly examine the paint—the weather didn’t cooperate. I missed a few paint cracks, but overall the Fulvia appeared as advertised. A few days short of my 35th birthday, I bought it, and the car went directly to White Plains for a minor restoration that included a few rust repairs, fuel-system cleaning, and tuning to bring it up to tip-top mechanical shape.

A strong-running Fulvia is a joy to command. A ridiculously long shift lever sprouts from the firewall, but the movement through the four forward speeds is slick and precise. Rushing the one-two shift results in a graunch from the synchros, something noted in the Road & Track test of the Fulvia coupe. A delicate precision is infused throughout the machinery, from the way the doors click shut to the unassisted steering’s surprising feedback when bent into a corner. There’s nothing particularly interesting about the control-arm front and beam-axle rear suspension other than the transverse leaf spring that suspends the front. Push as hard as you like, the Fulvia simply gobbles up abuse, a trait that helped make it a world-championship-winning rally car. 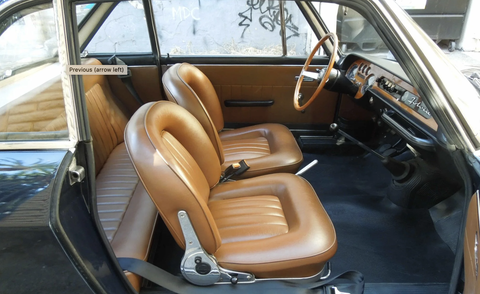 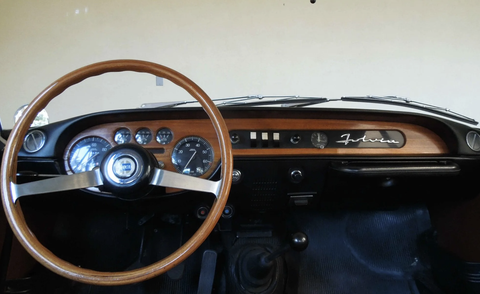 Credit for the light feel is part tuning, but it’s also the 2000-pound curb weight, a number that’s only about 100 pounds heavier than the 2005 Lotus Elise that replaced the Lancia. Fixed exterior panels are steel, and mine came with aluminum doors, hood, and trunklid. Opening the hood shows off the narrow-angle V-4 that sits canted at about 45 degrees, and the entire powertrain and front suspension mounts to a subframe. Power travels to the front wheels, and the longitudinal four-cylinder hangs out in front of the front-axle line as in most modern Audis.

On the highway, the Fulvia cruised happily at 80 mph, and the narrow-angle four hummed a happy thrum, snarled through the intake, and rumbled out the exhaust. Around town the 1.3-liter engine made enough power to accelerate briskly when floored. R&T clocked a 12.6-second time to 60 mph and an 18.6-second quarter run at 75 mph. The mechanical tune it sings is one that you want to last, and since it’s not quick, you get to hear the engine working and the transmission humming. Unassisted four-wheel disc brakes stopped the little coupe quickly and offered a nice firm pedal with strong bite.

I’d intended on using it as a daily driver after moving to Los Angeles, but a brake master-cylinder failure early on in its time in SoCal made me a bit gun-shy about using it to run out to buy kale salads and avocados and all the things you do when you live in California. Parts are surprisingly plentiful and aren’t expensive. Other than a generator rebuild in 2010 or so, the Fulvia never asked for any attention.

The Lancia community is tiny, so when I started talking about selling, a buyer quickly emerged whose enthusiasm for the car gave me confidence that it would be looked after. Over the years the current owner, and now seller, invited me to visit and drive the Fulvia. Check-ins have always included a report on all of the work and love he’s poured into it.

Lancia made about 250,000 Fulvia coupes from 1965 to 1976, but it’s an exceedingly rare vehicle in the States. Take one to a car show and be prepared to answer a lot of questions including, “What kind of Corvair is this?” But, the upside is you’ll meet a lot of memorable people because this is an interesting car that attracts interesting people. The auction ends on Tuesday, May 24, so at this point there are only a few days left to score one of the most beautiful and special little cars I’ve ever owned.

I Love My Regular-Cab Pickup, but Let's Face It, It's No Family Car