The Lotus Esprit is one of the longest-running and most recognizable sports car nameplates to come out of England. Thanks to one seller on Hemmings, a lucky enthusiast now has the chance to purchase what could be the world’s nicest Esprit Turbo, which has turned just 167 miles since new.

The minty car in question is a 1988 Lotus Esprit Turbo Commemorative Edition. Only 88 of these commemorative cars were built in 1988 to celebrate 40 years of Lotus being incorporated. The 1988 model year also saw the introduction of the new bodywork penned by Peter Stevens, kicking off what is often referred to as the X180 generation of the Esprit. This particular Commemorative Edition model is number 68 of the run and wears the obligatory Pearlescent White exterior paintwork shared by all Commemorative Edition models. Inside you’ll find a tri-tone Blue interior which looks fantastic in an era of monotone offerings. Under the hood, there’s a Bosch KE-Jetronic fuel-injected and turbocharged 2.2-liter four-cylinder, which provides 215 horsepower and 192 lb-ft of torque in U.S.-spec. That power is sent to the rear wheels by way of a five-speed manual transaxle.

This low-mile survivor was delivered new to Robert’s Lotus in Meriden, Connecticut in 1988 carrying an MSRP of $70,645. In the decades that have passed since, not much has changed for the sports coupe. The seller claims that the car has spent its entire life in a climate-controlled garage and remains entirely the same as it arrived back in 1988. In fact, the car has never been registered and retains its original Manufacturer’s Statement of Origin. The seller claims this is the only Esprit to retain those honors anywhere in the world. The Esprit is even still wearing the same Goodyear NCT tires that it left the factory with. The seller claims that the car runs and drives just as well as you’d expect from a brand-new car, though we wager a fresh head gasket and timing belt are likely in order. However, it seems unlikely that whoever buys this thing will ever add any miles to the odometer.

If you’re interested in the chance to own the nicest Lotus Esprit in the world, you’re going to need $146,000. While you could easily get a new Lotus Emira for that sort of cash, that is a real bargain as far as survivor sports cars are concerned. Unfortunately, it seems as if this particular car is destined for a life of sitting in yet another garage. That’s a shame, but a bit more understandable in this case than most. 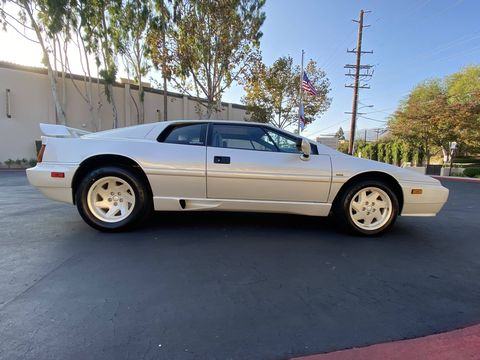