While much attention focused on Silicon Valley’s riches, banks like JPMorgan, BofA, Wells Fargo and others were gaining momentum.
Volatility juiced Wall Street’s trading hauls, investment bankers rode a dealmaking boom, and Donald Trump boosted bottom lines by slashing taxes.
Ultimately, banks’ fortunes depend on the health of their clients, says Wall Street attorney H. Rodgin Cohen, but their epic profits will drop “if the economy takes a downturn, a real downturn.”

He’d joined Morgan Stanley in the grim days of 2009, when big banks were trying to pay back taxpayer bailouts and deflect public fury. But four years later, the ire was fading and ambition was the order of the day.

“It really felt like, for the first time, the job and the career weren’t defined by the context of the financial crisis,” Diop said. “We are past this now. And now it’s time for us to do new deals.”

In the years that followed, his rise to managing director traced a new boom. He helped orchestrate a multibillion-dollar deal with SoftBank Group, whose breakneck investments defined an era, then closed a huge SPAC merger at the height of that rush.

Diop didn’t know it, but he was playing a small role in something almost unfathomably lucrative: The first trillion-dollar decade for the six giants of U.S. banking. That’s not $1 trillion of total revenue, it’s pure profit.

Such a haul didn’t seem possible before the decade began, when Wall Street was the target of a global protest movement and politicians at both ends of the spectrum were seething over bailouts or aiming to break up too-big-to-fail lenders. 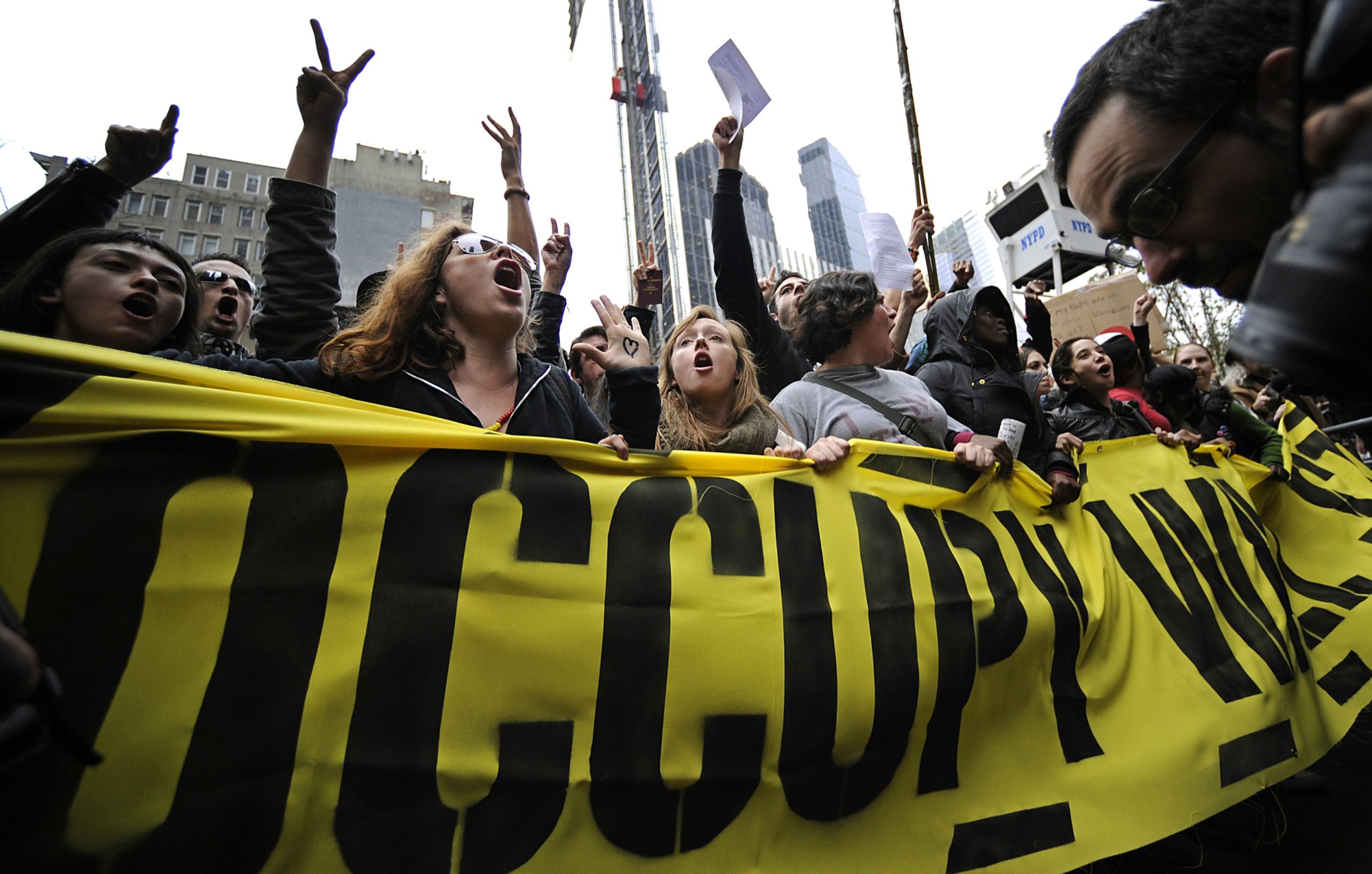 They swelled instead, outpacing corporate America so handily that JPMorgan Chase & Co., Bank of America Corp., and even hobbled Wells Fargo & Co. are on track to make more profit over those 10 years than all but a few publicly traded U.S. companies, according to data compiled by Bloomberg.

Citigroup Inc., Goldman Sachs Group Inc. and Morgan Stanley aren’t far behind. And together the six are poised to make even more next year.

While much of the world’s attention was focused on the riches minted by Silicon Valley, banks were gaining momentum.

There isn’t one way to explain how they pulled it off: Volatility juiced Wall Street’s trading hauls, investment bankers like Diop rode a dealmaking boom, and Donald Trump boosted bottom lines by slashing taxes. Likewise, there isn’t one reaction across the industry to the milestone. 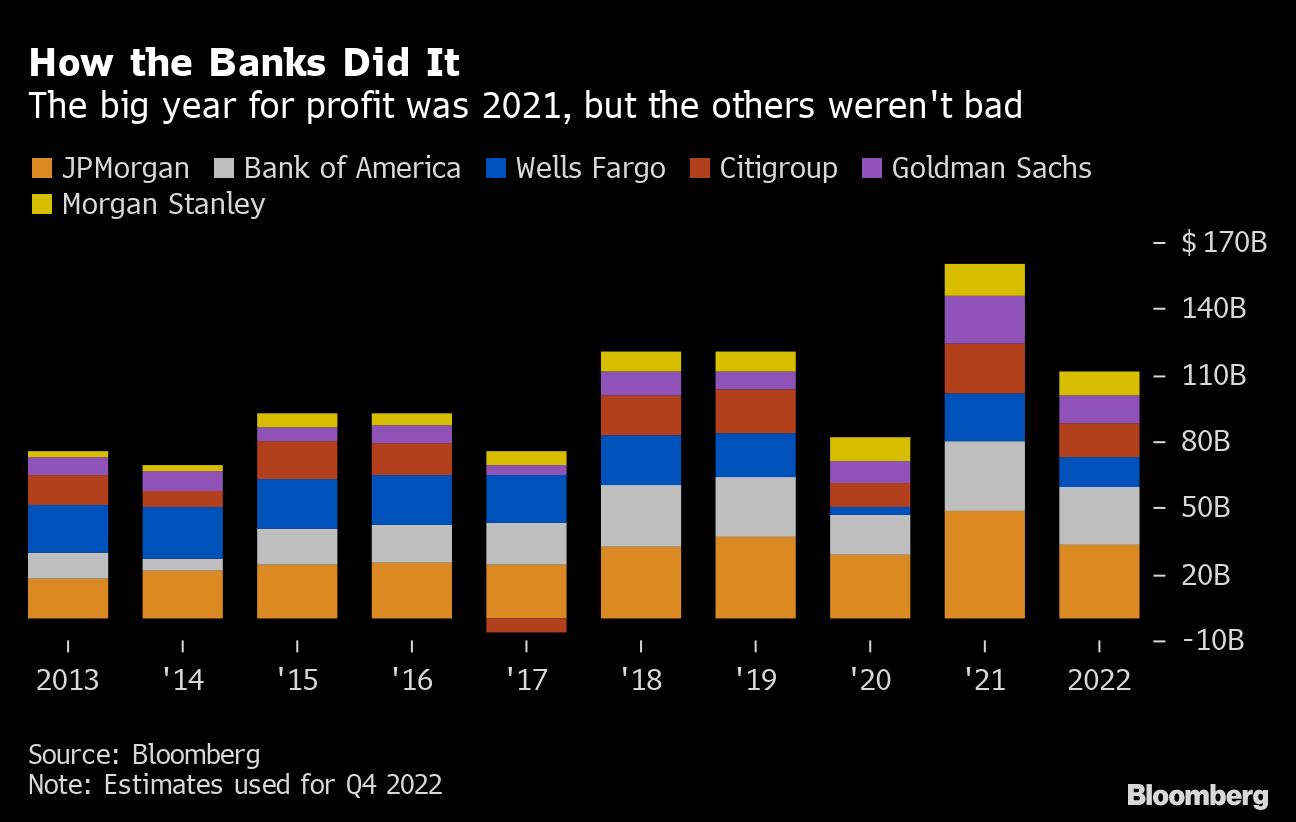 “Sometimes there’s this sense that the fact that they profited that much is somehow terrible, and I just don’t think that’s the case,” said Betsy Duke, a former Federal Reserve governor who chaired Wells Fargo’s board until 2020. “About everything you could throw at the financial system has been thrown at it in the last 10 years. These banks have not just survived but they’ve actually thrived.”

In a decade of public anger at the banks, tougher rules, geopolitical havoc, the pandemic and some treacherous market swings, banks “were able to cope with all of that, and not only cope with it but earn $1 trillion,” Duke said.

Analyst estimates show the six banks are quickly closing in on that feat — $1 trillion in a 10-year period — and that if they don’t reach the milestone at the end of this month, they will sometime in the first few weeks of 2023. It isn’t just the scale of profit that’s so startling, though, but the industry’s ability to push through scandals and thrive anew.

Ten years ago, JPMorgan, now the most profitable and valuable U.S. bank by market capitalization, was in the doghouse after the London Whale trading fiasco.

Wells was on top of the big six, the most valuable and the sole member of the group pulling in more than $20 billion. Though its earnings were later derailed over revelations of consumer abuses, analysts see it nearing that level again in 2023.

What didn’t transform over those years is the broad outline of the business: Banks sell stocks and bonds, trade financial instruments, advise on corporate takeovers, manage wealth, handle payments and lend.

Back in 2013, some traders were already mourning the casino-style risk-taking that Dodd-Frank of 2010 threatened, even if Washington was still hammering out the exact rules.

To get out of the shadow of the global crisis, the banks had to pay. In 2014, Bank of America agreed to a record-breaking $16.7 billion settlement to end probes into shoddy mortgage practices, passing JPMorgan’s $13 billion. By then, some banks were mining new veins of profit that got them into trouble.

Employees inside Wells Fargo, under pressure to meet sales targets, set up millions of accounts for customers who hadn’t asked for them, the most famous in a series of scandals that ultimately spanned most of its businesses.

And in Malaysia, Goldman Sachs finished raising billions of dollars in 2013 for a state-owned investment fund known as 1MDB, which was then pilfered by a group including the former prime minister.

“My biggest regret in the last decade was not stopping the 1MDB transaction,” said former Goldman partner Robert Mass, a compliance executive. “Each issue was vetted, in some cases multiple times, but in the end the answers that we received satisfied us.”

Mass, who now teaches philosophy at Hunter College in New York, said the firm was “misled by our own people, who were in on the bribe, in a way that we had no reason to doubt and could not disprove.” He wasn’t sure if he learned any lessons, “other than to be less trusting.” 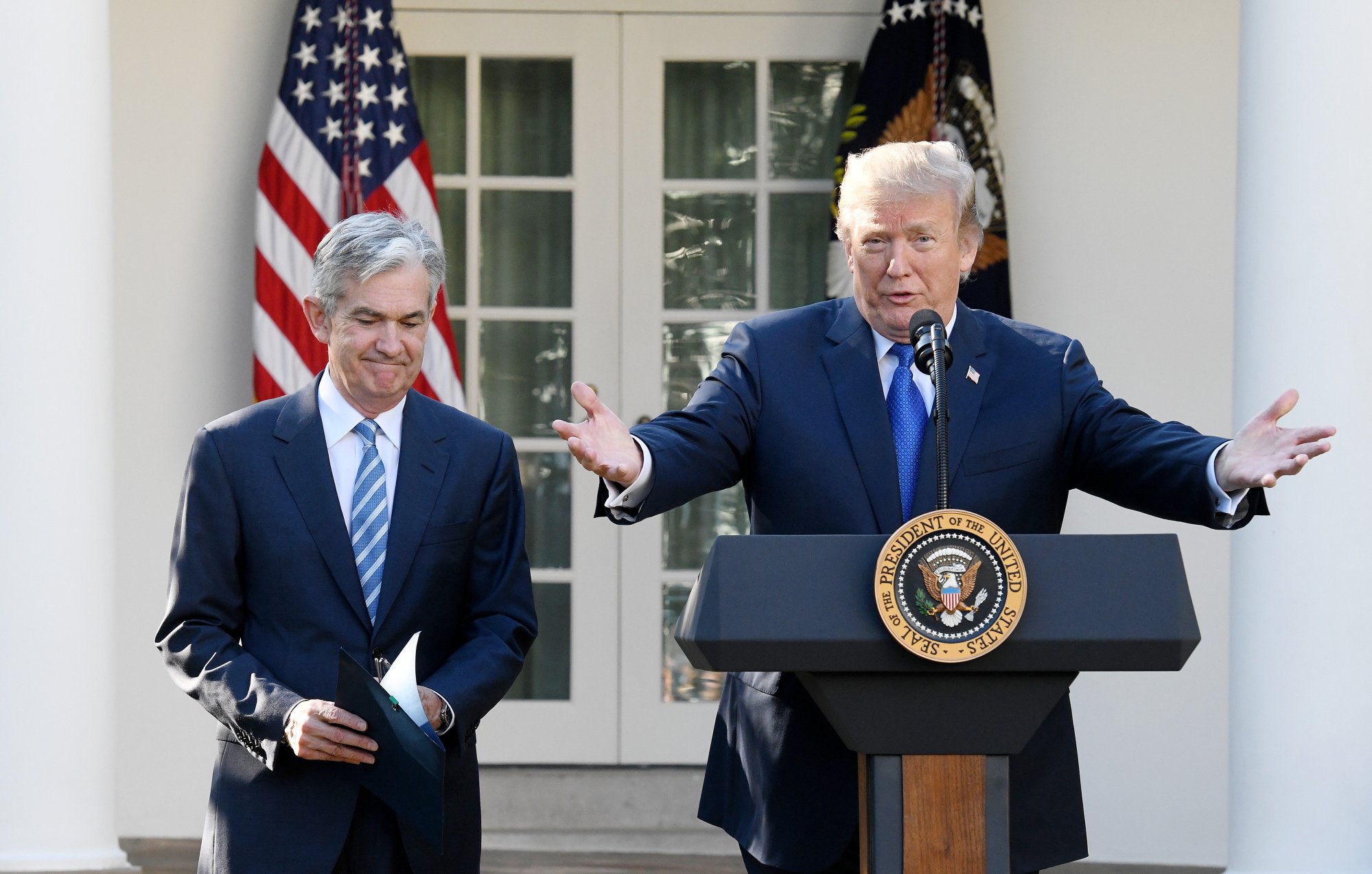 The magnitude of profit makes those mistakes look like hiccups. One person the industry can thank, Trump, taunted banks on the campaign trail before putting two Goldman alumni in charge of a tax overhaul that helped transform corporate profits.

Banks that had gotten used to paying three in ten dollars to the government found themselves forking over less than one in five for 2018. Their tax bills went down from there.

That year marked a new intensity for Wall Street’s growth. Banks that had made less than $70 billion in 2017 made $120 billion in 2018 thanks to tax cuts, an uptick in interest rates and surges in retail banking and dealmaking. Their combined assets, which hovered around $10 trillion for years, began to shoot up.

The way top Wall Street lawyer H. Rodgin Cohen sees it, all of this shouldn’t be a surprise. “Banks may be seen as always winning with a couple of exceptions because of their role in the economy,” said Cohen, who’s now senior chair of Sullivan & Cromwell LLP. “They are intermediaries. They’re borrowing and they’re lending.”

'Everything Is on the Table' in CFP Competency Standards Review