California also has a homeowners insurance crisis. That crisis began in 2019, when nonrenewals of residential policies in the state grew by 36% and new policies written by the state’s residual market FAIR Plan surged 225%, according to the California Department of Insurance.

Obviously, California’s homeowners insurance crisis is closely related to its wildfire insurance crisis, as the former began following back-to-back years of record wildfire losses. To stanch the bleeding of admitted market policies into the FAIR Plan and the surplus lines market, the department has, for four straight years—2019 through this year—issued moratoria barring insurers from nonrenewing policies in ZIP codes adjacent to specified major wildfires.

But the two crises are not identical. The cause of the wildfire crisis is a century of building and land-use-management practices that have proven unwise, and that are now being exacerbated by climate change. The cause of the homeowners insurance crisis is Proposition 103.

Why Insurers Don’t Want to Write in California

The prior-approval regulatory system California established with 1988’s Prop. 103 places stringent limits on how a property insurer may price and underwrite risk. Under current interpretations of the law, as Personal Insurance Federation of California President Rex Frazier noted in Sept. 22 testimony to the House Financial Services Committee’s Housing, Community Development and Insurance Subcomittee, “an insurer must justify its requested statewide premium for future wildfire losses based upon its average annual wildfire losses over the last 20 years.”

But, of course, the future may not look like the past. Even though we have averaged slightly fewer wildfires annually in the 21st century than we did in the 1990s (70,072 per year since 2000, versus 78,600 per year in the last decade of the 20th century), the fires we experience now are far more devastating. They have burned an average of 7.0 million acres per year since 2001, compared with an annual average of 3.3 million acres in the 1990s, according to the Congressional Research Service.

A look at data from California’s insurance market better illustrates why long-run averages can prove wholly inadequate to project future losses. Homeowners insurers doing business in the state posted a combined underwriting loss of $20 billion for the massive wildfire years of 2017 and 2018 alone. To put that in context, those losses were double the total combined underwriting profit of $10 billion that California homeowners insurers had generated from 1991 to 2016.

Thus, we see that, virtually overnight, a market that had experienced long-term profitability can turn massively unprofitable. Such cycles are not new to property insurance, obviously, and the industry is accustomed to taking catastrophic events into account when conducting Bayesian assessments and updating their “priors.” But how should a California insurer regard those 2017 and 2018 losses—as outlier deviations from an underlying historical trend, or as indicators of a new baseline that should set expectations moving forward?

In fact, climate science suggests that, not only are such years not outliers, but the situation is likely to get even worse. According to a report published earlier this year by the United Nations Environment Program, the number of wildfires worldwide is expected to increase by 14% before the end of the 2020s, by up to 30% by 2050, and by up to 50% by 2100.

We also know that more and more people are living in areas classified as “Wildland Urban Interface” (WUI): mostly low-density settlements near undeveloped wildlands and vegetative fuels that are at extremely high risk of wildfire. According to a 2018 study in the Proceedings of the National Sciences Foundation, about 43% of all new houses built between 1990 and 2010 were in WUI areas, as the proportion of the U.S. population living in such areas grew from 29.4% to 31.9%. 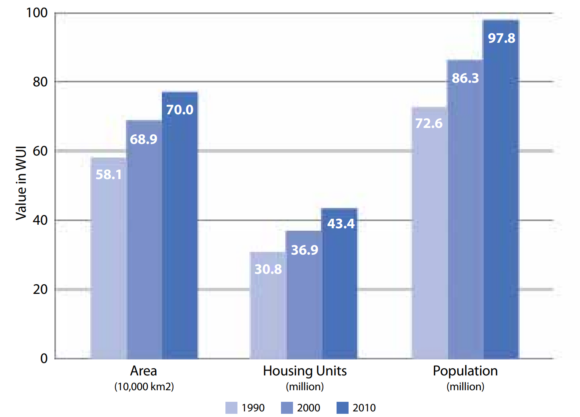 SOURCE: PNAS, via the American Academy of Actuaries

Insurers have access to tools, like advanced wildfire catastrophe models, that would allow them to project future wildfire losses, taking into account both changing climactic factors and a given property’s proximity to fuel load. Alas, such considerations are not currently permitted under California’s Prop 103 system. Nor can rates reflect the cost of reinsurance, which has been rising globally in response to the need for more capital to back catastrophe risk transfer. In essence, this has meant that California—a state that has long prided itself as being on the leading edge when it comes to its response to climate change—is effectively telling insurers to ignore the science.

Thus, unsurprisingly, denied the ability to charge rates that reflect the future risk of wildfire, admitted market insurers have pulled back from the most at-risk areas. Ironically, this has meant a migration of policies to surplus lines insurers and to the California FAIR Plan, both of which are allowed to use catastrophe models in setting their premiums.

What, if Anything, Can Be Done?

The subcommittee’s hearing—the first devoted specifically to the subject of wildfire since the former House Banking Committee became the Financial Services Committee in the 107th Congress—did not elucidate many solutions to the twin crises facing California and, to a lesser extent, other Western states like Oregon, Colorado, and New Mexico.

The hearing’s ostensible purpose was to consider full Committee Chair Maxine Waters’ (D-Calif.) H. R. 8483, the Wildfire Insurance Coverage Study Act 2022, which calls for studies by FEMA and the Office of the U.S. Comptroller-General on the recent history of wildfires and their impact on the homeowners insurance market. A similar report from the comptroller-general was also commissioned by H.R. 5118, the Continental Divide Trail Completion Act, which passed the full House in July but has not yet been taken up in the Senate.

Nonetheless, some potential pathways toward reform have emerged; some mentioned at the hearing, but most not.

The Promise of Mitigation

California Insurance Commissioner Ricardo Lara, who also testified to the subcommittee, has focused on the affordability challenges posed by the state’s wildfire and homeowners insurance crises. Earlier this month, he submitted new rules to the California Office of Administrative Law that will require insurers to offer discounts to policyholders who make specified retrofits to harden their homes and increase the defensible space around their properties.

Certainly, expanded mitigation offers an opportunity to reduce losses at the margin, although the history of mandated mitigation discounts is a mixed bag.

Roy Wright, a former Federal Emergency Management Agency (FEMA) administrator who now heads the Insurance Institute for Business & Home Safety, testified to the subcommittee about standards IIBHS has promulgated to certify wildfire-prepared homes, including Class A roofs, non-combustible gutters and downspouts, ember-resistant vents, and a minimum five feet of defensible space, completely free of combustibles, around the entire base of a home. Some mitigation experts also tout the use of long-term flame retardants like Phos-Chek.

There was also some bipartisan consensus between Subcommittee Chair Emanuel Cleaver (D-Mo.) and Ranking Member French Hill (R-Ark.) about the need to discourage development in the WUI. This, no doubt, reflects an approach that is familiar to members of Congress who have engaged on the troubles of the National Flood Insurance Program and the role it plays in facilitating development in flood-prone regions. As the American Academy of Actuaries argued in a report on wildfire risk published earlier this year: “In some respects, the simplest solution to the problem of wildfires threatening life and property in WUIs would be the prohibition of development in WUIs.”

The jury is out on whether that would be simple, but it might also be wrong. The analogy of fire insurance to flood insurance is understandable, but it’s important to also bear in mind how flood risk differs from wildfire risk.

More development in flood-prone regions magnifies the degree of flood risk in a more or less linear fashion. As you get more development in a floodplain, not only are more people and properties exposed to flooding, but there are more impermeable surfaces, blocking avenues through which floodwaters would otherwise drain.

The relationship between wildfire and development isn’t quite so straightforward. As a thought experiment to illustrate this, just consider what Jonathan Swift might call “a modest proposal“: wildfire risk could be eliminated if only you cut down all the trees.

Thus, while one way to limit wildfire exposure would be to restrain development in WUI areas, another might be encourage much more dense development. This is particularly relevant in states like California that are also experiencing a housing-shortage crisis.

The first priority, of course, should be to reform land-use policies to permit much more dense housing in the urban core, which is already at relatively low risk. Indeed, it is likely the lack of affordable housing in that core that has driven much of the WUI development in the first place. Matthew R. Auer, the dean and Arch Professor of Public and International Affairs at the University of Georgia’s School of Public and International Affairs, testified to the committee about his own research finding that 60% of the 98 counties at highest risk of wildfire have poverty rates that exceed the national average.

Ultimately, little can be done to make insurance more broadly available to at-risk homeowners in California without contending with the state’s notoriously difficult to amend Prop. 103. As Rex Frazier put it in his testimony:

There is no other state that requires insurers to look back two decades to justify its requested premium levels intended to fund future wildfire losses. Without an updated rating system, it is difficult to see how California insurers will be able to serve the needs of the most at-risk communities in the future.

Helpfully, the use of catastrophe models is not explicitly barred under Prop. 103, as such models largely did not yet exist in 1988. And California has begun to take steps in the direction of permitting their use, with new regulations requiring insurers to disclose to consumers their “wildfire risk score.”

But broader adoption will likely require a compromise in which the department can formally review the output of wildfire models, much as the Florida Commission on Hurricane Loss Projection Methodology (FCHLPM) does for hurricane models. A formal review process could also provide insurers with the certainty they would need to justify investing in refined pricing strategies, without fear that regulators will later reject the underlying methodology.

One option would be for the Legislature to revive proposals it considered in 2020 that were somewhat similar to the “takeout” program used successfully to depopulate Florida’s Citizens Property Insurance Corp. Under the Insurance Market Action Plan (IMAP), insurers who committed to write a significant number of properties in counties with large proportions of FAIR Plan policies would be allowed to submit rate requests that considered the output of catastrophe models and the market cost of reinsurance. As it stands, insurers are not allowed to consider either factor in seeking higher premium levels, even if doing so would allow them to take on higher-risk policies.

The proposals earned significant scorn the first time around from the state’s highly organized consumer watchdog groups, even though the IMAP rate requests would, like other filings under Prop 103, remain open for public comment and would still have to be approved by the insurance commissioner. That skepticism remains, as United Policyholders Executive Director Amy Bach told the subcommittee that, in her organization’s view, “unlike traditional rate making based on actual events, predictive rate models are highly likely to overstate risk.”

Because the IMAP proposal would make changes to Prop. 103, passing it would require two-thirds majorities in both chambers of the Legislature. That’s an exceedingly high bar. But given the market’s escalating death spiral, sooner or later, lawmakers may come to see it as necessary. 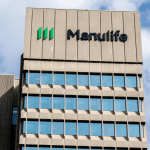 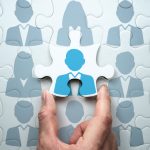 CSIO adds another insurance executive to its board of directors 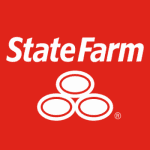 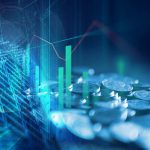 What is your intellectual self?

What is the most common health problem? 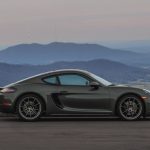