• With a Holman Moody 427-cubic-inch V-8 and a four-speed manual transmission, this Cobra is the apex of American 1960s performance machinery.

• Cobra production wound down in December 1966, so this is one of the last of a breed.

• The 427s were better sorted out than the narrow-body cars, though both are highly desirable. This auction on Bring a Trailer will be one to watch for any Cobra fan. It ends on November 14.

There’s an old joke that goes, Q: How do you know if a Cobra is real or a replica? A: It’s a replica. One of the most beloved 1960s racing machines is also one of the most copied, and there’s nothing wrong with that. A well-set-up Cobra replica is just the thing for blowing out the fall cobwebs with some V-8 thunder. But here comes the real deal. 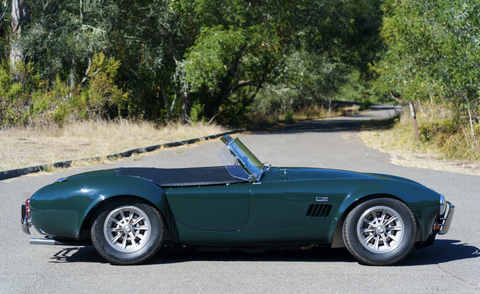 Up for auction this week at Bring a Trailer—which, like Car and Driver, is part of Hearst Autos—is a genuine 1966 Cobra 427 Mk III. Yep, that’s 427, as in cubic inches of displacement, some seven liters of Ford side-oiler muscle in a chassis that weighs just over 2500 pounds. As a friend of mine is fond of saying, that is the Big Stove option.

With 10 days to go, bidding sits at a very satisfying $950,000. But grab your popcorn, folks, because this is one of those auctions where the dollar value quickly exceeds “I could buy a house for that kind of money” and sky-rockets into “This, or a P-51 Mustang and a hangar to put it in?”

When Car and Driver road-tested the Cobra 427 in 1965, driving impressions included noting the more refined handling. Early Cobras were a handful and a half. “Everyone at Shelby is more than candid about admitting that the handling of the original Cobra was considerably less than optimum.” With a fully independent suspension, the Cobra 427 got that power to the road.

And what power it was. Clocked through the quarter-mile in just 12.2 seconds, this broad-shouldered machine was unrivaled by anything other than the big-block Corvettes, and perhaps not even them. The Cobra might have been a more resolved product, but it was still punchy and raucous. There’s a reason so many companies will sell you a photocopy of this icon of 1960s performance.

The example for auction at Bring a Trailer is particularly tasty. Chassis number 3283, it left Shelby American with a tamer 428-cubic-inch V-8 but was almost immediately treated to performance upgrades. Ford’s official race-car contractor, Holman Moody, was tapped for a built 427-cubic-inch engine, fitted with dual four-barrel carburetors. With the exhaust routed out the back, rather than side-exit, the driver can more properly hear the induction roar of fuel and air being sacrificed on the altar of speed.

It was returned to its original factory shade of dark green in 2013, and there’s a brutish elegance to this Cobra. The subtlety evaporates, of course, the moment you start up that big V-8, but the green-on-black color treatment pays homage to the original British ACs from which Cobras were born.

For the lucky auction winner with the deepest of pockets, this car will provide an unmatched driving experience. And, should you be out and about on a sunny morning, and this Cobra rumbles past you, maybe you’ll recognize it for what it is. Because statistics say that any Cobra you spot is a replica. But the real ones are out there too.