The Honda Pilot has experienced some rotten timing over the years. After helping establish the three-row crossover segment with its highly successful first-generation, Honda decided to switch things up and make a boxier, more rugged second-generation. Unfortunately, that coincided with a gas price surge that sent shoppers away from boxy, rugged vehicles. The third-generation went back to what worked originally, but was perhaps too much of a course correction, as boxy and rugged made a comeback in recent years. Now, to see if the fourth time’s a charm, the all-new, fourth-generation 2023 Honda Pilot arrives as a sort of blending of the two approaches.

The styling is indeed boxier than its melted soap predecessor, with the Honda Pilot TrailSport version leaning heavily into the rugged realm, but Honda didn’t go full 4Runner here. There is still a clean refinement to the design, which, when combined with the boxy silhouette, is a bit reminiscent of the Volvo XC90. Any comparison to that timeless beauty is always a good thing. Ornamentation is similarly restrained, and in person, both the Elite and TrailSport versions certainly put the 2023 Pilot in the running for the segment’s best-looking. At very least, it’s a lot less minivan-adjacent now.

The new Pilot is nearly 3 inches longer, with a similarly lengthened wheelbase, making it a bit more minivan-adjacent inside. That’s especially true of the novel new second-row seating arrangement standard on the Touring and Elite trims. At first look, it’s a bench seat, but as in the Odyssey and the Pilot’s Acura MDX cousin, the middle seat folds to create a console-like armrest, or (here’s the big part) be removed completely from the car. There’s no need to choose between eight-passenger bench seat or seven-passenger captain’s chairs at the dealer (unless you’re in the price range of a Sport, EX-L or TrailSport). Ah, but here’s the even bigger part: That middle seat can actually be stored inside the Pilot behind the third row and under the cargo floor. There’s a strap and tie-down points included as well. It’s not exactly light or easy to pull the seat out, but the fact that it’s possible is really impressive. 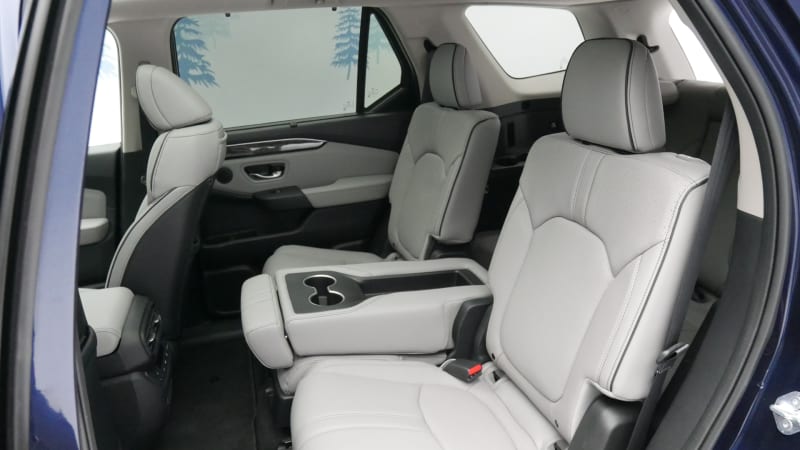 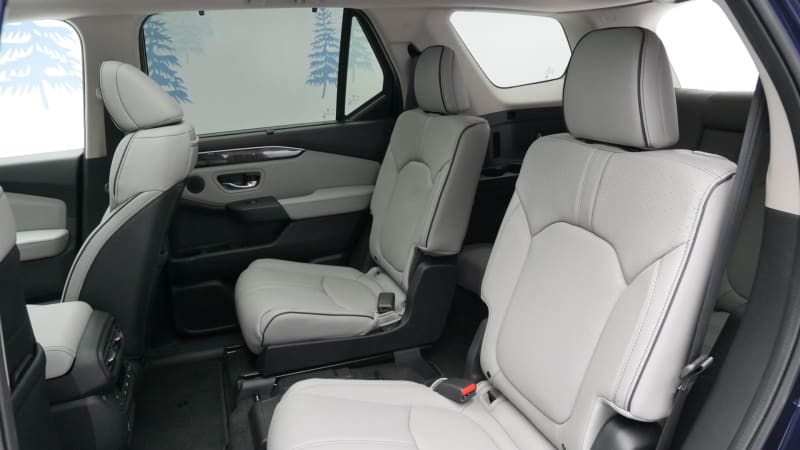 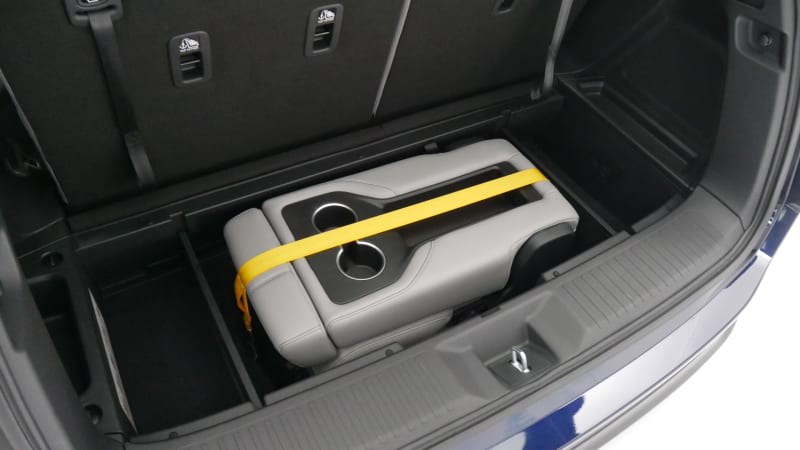 Third-row space grows by 2.5 extra inches of legroom, and is even friendlier for bigger teens and adults. A 6-foot-3 person fit quite comfortably back there. Cargo space explodes by 6 cubic-feet behind that third row from a decent 16.5 cubes to 22.4. Apparently, that does not include the huge underfloor area, which as before, can be utilized to carry even more luggage. We’ll be curious to see how much better the new Pilot is in a luggage test than its already-impressive predecessor.

Elsewhere in the cabin, the Pilot gets the same infotainment options as the Civic, HR-V and CR-V before it. That’s great news as the outgoing Pilot’s touchscreen was quite old and wasn’t that good when new. The base Sport trim gets a 7-inch touchscreen, while everything else gets the 9-inch unit along with wireless Apple CarPlay and Android Auto, plus wireless charging (the Sport requires a wire).

The design surrounding that touchscreen is surprisingly not a chip off the Civic block, foregoing the classy metal-look mesh airvents spanning the dash. Instead, the look is far more interesting than before and vaguely reminiscent of a Land Rover, which isn’t a bad thing, and certainly in keeping with the more rugged vibe. The center console design isn’t quite as uber-utilitarian as the outgoing one, but a shelf forward of the passenger makes its return to the Pilot – it was found on that boxy second-generation. Overall materials quality is competitive for the segment.

Mechanically, this is indeed an all-new Pilot, which resides on a new light truck architecture shared in part with the Acura MDX. The structure, steering column and suspension are significantly stiffer, with the latter adopting a new multilink setup at the rear. Sharper handling and agility are promised thanks to a revised variable steering ratio, and the brakes are bigger, too.

The engine may seem the same at first blush, but is in fact a new DOHC 3.5-liter in place of the outgoing SOHC 3.5-liter. Outgoing stays steady at 285 horsepower and 262 pound-feet, up from 280 hp and 262 lb-ft. A 10-speed automatic returns and is paired with paddle shifters for manual control. Standard on the TrailSport and Elite, and optional on the other trims, is the second-generation of Honda’s i-VTM4 torque-vectoring all-wheel drive system. It features a stronger rear diff that can handle 40% more torque while responding 30% quicker. As much as 70% of the engine’s power can be sent to the rear axle, with 100% of that transferred to one wheel. That would be the torque-vectoring bit, which is a boon when off-roading, in poor traction conditions, and when driving vigorously on a back road. If new Pilot’s strengthened chassis can take better advantage of i-VTM4’s talents, it certainly has the hardware in place to be one of the better three-row crossovers to drive.

As for the 2023 Honda Pilot TrailSport, it gets an off-road-tuned suspension with a 1-inch lift over a still-to-be-announced standard ground clearance. Approach and departure angles improve, too. The stabilizer bars, spring rates and damper valve tuning are exclusive to the TrailSport, as are a full-size spare and the 18-inch wheels (stamped with TrailSport) wrapped in Continental TerrainContact all-terrain tires. Skid plates protect the oil pan, transmission and gas tank, and Honda says they are capable of supporting the entire TBA curb weight crashing down on a rock. There are also visual differences, including lots of gloss black trim, more rugged black plastic trim on the rockers and lower rear bumper, and an exclusive Diffused Sky Blue Pearl paint option shown here.

Finally, there’s the TrailSport’s 1’s and 0’s. It includes a new TrailWatch camera system that features four exterior camera with four different views. It also gains a Trail mode beyond the usual menu of drive modes (Normal, ECON, Sport, Snow, Sand and Tow), which uses the front brakes to add quasi torque-vectoring up front and adds an exclusive “trail torque logic” capability to i-VTM4. The latter function comes in handy when one rear wheel loses contact with the ground. Should the car detect that, rear axle torque is increased, most of it is sent to the wheel still on the ground, but the low-to-no traction wheels maintains torque potential so that it can immediately receive power once it makes contact with the ground again.

You can read our 2023 Honda Pilot TrailSport preview drive to see how it drives off-road.

Mercifully, Honda upgraded the Pilot’s rather woeful driver assistance technologies, which were rife with false-alarms and pokey reactions when using adaptive cruise control. If they’re anything like those in the new Honda CR-V, they’ll at least be tolerable now, if not class-leading.

Pricing will be announced closer to when the 2023 Pilot begins rolling down the production line in Lincoln, Ala. It will now be available in Sport, EX-L, TrailSport, Touring and Elite, which would in theory make the base price higher than many in the segment. The outgoing Pilot’s discontinued LX trim doesn’t make a comeback, and the Sport always carried a higher price tag.

RenRe expects “reset on rates” to persist through 2023: CEO O’Donnell

Signed up for health insurance on my partner’s plan through her employer, terminated it after we were billed 3x as much as we understood it to cost. Now outside of open enrollment and having a hard time navigating this weird situation.

February 3, 2023 InsuNews
← What’s the Worst Three-Wheeler of All Time? ← Cat bond spread levels double since the start of 2022: Tenax