Dead skunks in the middle of the road may stink to high heaven, but it’s deer that have the insurance industry wrinkling its nose. According to the National Insurance Crime Bureau, deer are responsible for one-third of all animal-related claims. Which is why auto insurance giant State Farm conducts an annual study of claims from deer and other ­ungulates such as elk, caribou, and moose. The company uses data gathered from the claims history of its 44.1 million insured drivers to project the total number of deer strikes across the industry—and to determine in which states drivers are at the greatest risk. State Farm also publishes an interactive map showing where the risk is worst.

2022 update to the deer map from State Farm

As in previous years, for 2022 the insurer says West Virginia is the highest-risk state, with one in 35 crash-related claims involving an animal. Rounding out the top five are Montana, South Dakota, Michigan, and Wisconsin. Those at lowest risk are Nevada—where only one in 698 claims involves a collision with an animal—plus Hawaii, Arizona, Florida, and, surprisingly, Alaska. 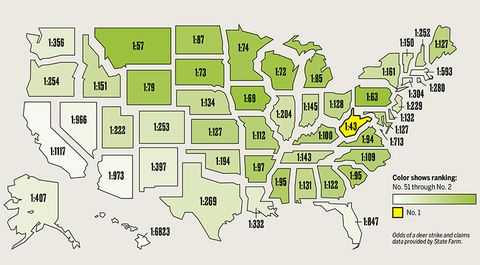 Not only is November the month to grow your mustache to raise awareness of men’s health issues, it’s also when you’re most likely to hit a deer, as it’s mating season. For the deer. Not for you.

Do Not Swerve to the Right. Or to the Left

Remove thy foot from the accelerator and brake in a straight line if you see an animal in the road. What could be a minor collision often gets worse when a driver trying to avoid an animal leaves his lane and collides with another object or rolls the car.

Experts say the roadkill threat level escalates with size. Animals that weigh more than 500 pounds, such as cows, prove most fatal to drivers traveling at highway speeds. And despite the realism of Tommy Boy, instances of animals surviving an impact and then attacking the vehicle are rare.

January 28, 2023 InsuNews
← Watch Out while Driving: You're More Likely To Hit a Deer This Week ← Junkyard Gem: 1990 Buick Reatta Coupe