Insurance-linked securities (ILS) and catastrophe bond funds fell -5.54% on the impacts and anticipated losses from hurricane Ian, according to the latest update of the ILS Advisers and Eurekahedge ILS fund performance index.

The steep decline for September 2022 was to be expected, as ILS and cat bond funds factor in their expected losses from major hurricane Ian’s landfall in Florida during the month.

However, in terms of how steep a decline this was, it is actually far less than the Eurekahedge ILS Advisers Index declined after September 2017’s hurricanes (Harvey, Irma and Maria), when this Index fell -8.61%.

September 2022’s result though, with the average return of insurance-linked securities (ILS) funds being -5.54%, is still the second worse monthly performance for the ILS Advisers Index since its inception.

After September’s decline, the ILS Index is now -4.28% down year-to-date.

As a reminder, the Eurekahedge ILS Advisers Index tracks a basket of ILS and cat bond funds, with a mix of strategies that are pure cat bond only, or a mix of cat bonds and private ILS (so collateralised reinsurance and retrocession), or private ILS only.

It’s worth comparing this Index to the performance of the cat bond only Plenum CAT Bond UCITS Fund Indices, which declined by over -5% at the end of September, but then dropped a little further until it was -6.04% down as of October 7th and eventually -6.5% as of October 14th.

So there could be some additional negative performance through October for the ILS Advisers Index, although that month will also have a positive premium contribution to offset some of that as well.

Of the ILS funds tracked by the Eurekahedge ILS Advisers Index, pure cat bond funds as a group fell to a -4.57% performance for September 2022, while the subgroup of funds whose strategies include private ILS and collateralised reinsurance or retro fell further, with performance of -6.23% for the month.

As ever, the range of performance reported reflects the significant variation in ILS fund strategies, on a risk and return basis.

All 24 of the ILS funds tracked by this Index were negative for September 2022, showing how impactful hurricane Ian has been to the market.

That’s one of the widest performance gaps ever reported for this Index, so it will be very interesting to see what happens with October’s ILS fund results, as some managers may incorporate more hurricane Ian impacts in that month’s figures. 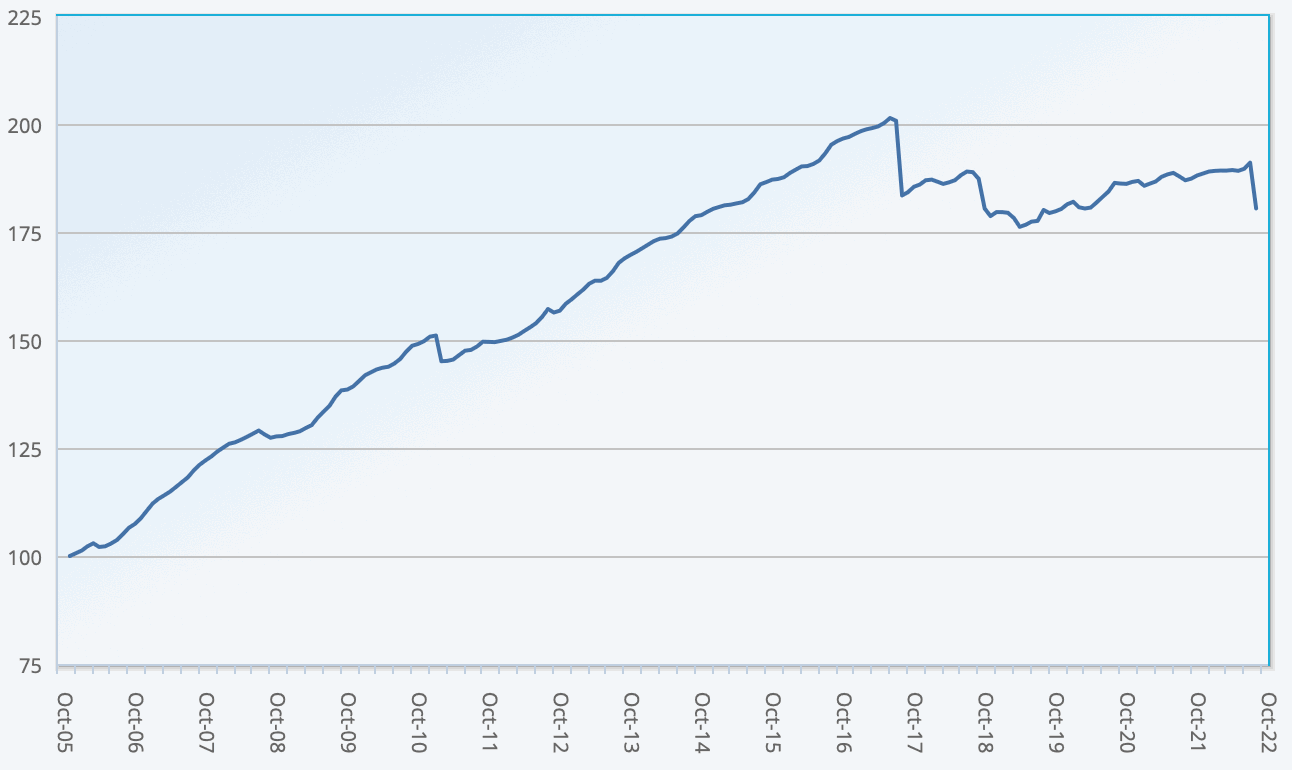 You can track the Eurekahedge ILS Advisers Index here on Artemis, including the USD hedged version of the index. It comprises an equally weighted index of 24 constituent insurance-linked investment funds which tracks their performance and is the first benchmark that allows a comparison between different insurance-linked securities fund managers in the ILS, reinsurance-linked and catastrophe bond investment space.